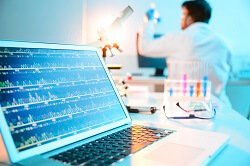 Using so-called next-generation genome sequencing, researchers at Johns Hopkins have identified 84 potential inherited gene mutations that may contribute to the most severe forms of bipolar disorder. About 5.6 million Americans are estimated to have bipolar disorder.

The investigators say their study is one of the first of rare genetic variations in people with bipolar disorder, which, in contrast to most previous studies of common variation, can provide a more direct insight into the biology underlying the susceptibility to bipolar disorder.

And the report on the work published on June 1 in JAMA Psychiatry, led by Fernando Goes, M.D., assistant professor of psychiatry and behavioral sciences at the Johns Hopkins University School of Medicine, affirms the need for DNA from a vast patient population to definitively confirm the role of rare mutations identified using the most advanced genome sequencing techniques.

“One thing we learned is that it will take genetic data from at least several thousand more people with bipolar disorder to confirm that these rare mutations do in fact directly cause the disease,” says Goes. “We are working with the Bipolar Sequencing Consortium to gather more data and collaborators so we can definitively figure out causes.”

Bipolar disorder is a mental illness characterized by periods of alternating episodes of severe depression and ecstatic mania, with the anguished person trying for a happy medium in the swinging pendulum of high and low moods.

Goes says some early genetic studies looking into the cause of the disease used genomewide association studies to search for common, single-letter DNA changes that individually turned out to have very small effects but, in combination, can explain a small proportion of the risk for bipolar disorder. Goes’ team used newer gene sequencing technology that instead can read millions of pieces of DNA at the same time to find even rarer genetic mutations that are rare but may have a more severe effect.

Initially, Goes’ team looked at eight families with a history of bipolar disorder through several generations, likely indicating a significant inherited component. Ultimately, the investigators sequenced the whole genomes of 36 family members with the disease. Examining only the portion of the genome that acts as protein blueprints, they identified 84 rare gene variations that stood out in these family members.

To further the case that these 84 variations were connected to the disease, they compared them to versions of the same genes found in 3,541 people with bipolar disease and 4,774 controls without the disease. Although many of these genetic variations were found to be overrepresented in the bipolar cases, the researchers caution that the data weren’t powerful enough to show that any specific mutation among the 84 rare mutations directly causes bipolar disorder, noting that patient sample sizes likely in excess of 10,000 cases will be necessary to pinpoint rare mutations within a specific gene. The study did find evidence that genes from this study had previously been implicated in other psychiatric disorders, such as autism and schizophrenia, which provides additional support for the overlap of autism and schizophrenia risk genes with risk genes in families with bipolar disorder.

“Once we can confirm that these rare mutations are associated with bipolar disorder in other samples,  our plan will then be to integrate them with the more subtle, common mutations from the earlier genomic studies to better understand the cause of bipolar disorder,” says Goes.

According to the World Health Organization, bipolar disorder overall affects more than 60 million people worldwide and about 2.6 percent of adults in the U.S.