Gene Found To Foster Synapse Formation In The Brain 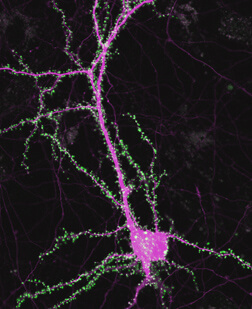 Researchers at Johns Hopkins say they have found that a gene already implicated in human speech disorders and epilepsy is also needed for vocalizations and synapse formation in mice. The finding, they say, adds to scientific understanding of how language develops, as well as the way synapses — the connections among brain cells that enable us to think — are formed. A description of their experiments appears in Science Express on Oct. 31.

A group led by Richard Huganir, Ph.D., director of the Solomon H. Snyder Department of Neuroscience and a Howard Hughes Medical Institute investigator, set out to investigate genes involved in synapse formation. Gek-Ming Sia, Ph.D., a research associate in Huganir’s laboratory, first screened hundreds of human genes for their effects on lab-grown mouse brain cells. When one gene, SRPX2, was turned up higher than normal, it caused the brain cells to erupt with new synapses, Sia found.

When Huganir’s team injected fetal mice with an SRPX2-blocking compound, the mice showed fewer synapses than normal mice even as adults, the researchers found. In addition, when SRPX2-deficient mouse pups were separated from their mothers, they did not emit high-pitched distress calls as other pups do, indicating they lacked the rodent equivalent of early language ability.

Other researchers’ analyses of the human genome have found that mutations in SRPX2 are associated with language disorders and epilepsy, and when Huganir’s team injected the human SRPX2 with the same mutations into the fetal mice, they also had deficits in their vocalization as young pups.

Another research group at Institut de Neurobiologie de la Méditerranée in France had previously shown that SRPX2 interacts with FoxP2, a gene that has gained wide attention for its apparently crucial role in language ability.

Huganir’s team confirmed this, showing that FoxP2 controls how much protein the SRPX2 gene makes and may affect language in this way. “FoxP2 is famous for its role in language, but it’s actually involved in other functions as well,” Huganir comments. “SRPX2 appears to be more specialized to language ability.” Huganir suspects that the gene may also be involved in autism, since autistic patients often have language impairments, and the condition has been linked to defects in synapse formation.

This study is only the beginning of teasing out how SRPX2 acts on the brain, Sia says. “We’d like to find out what other proteins it acts on, and how exactly it regulates synapses and enables language development.”

Roger Clem of the Mount Sinai School of Medicine also participated in the study.

Link to the Science article

Related Stories:
Q & A with Rick Huganir on erasing the emotional trauma from disturbing experiences in mice

Gene Found To Be Crucial For Formation Of Certain Brain Circuitry