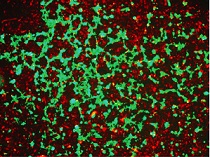 Cancer’s no game, but researchers at Johns Hopkins are borrowing ideas from evolutionary game theory to learn how cells cooperate within a tumor to gather energy. Their experiments, they say, could identify the ideal time to disrupt metastatic cancer cell cooperation and make a tumor more vulnerable to anti-cancer drugs.
“The reality is that we still can’t cure metastatic cancer that has spread from its primary organ and game theory adds to our efforts to attack the problem,” says Kenneth J. Pienta, M.D., the Donald S. Coffey Professor of Urology at the Johns Hopkins Brady Urological Institute, and director of the Prostate Cancer Program at the Johns Hopkins Kimmel Cancer Center. A description of the work appears in a June 20 report in the journal Interface Focus.
Game theory is a mathematical study of strategic decision-making, and has been widely used to predict conflict and cooperation between individuals and even nations, but increasingly is applied to forecasting cell-to-cell interactions in biology with an ecological perspective. Tumors contain a variety of cells shifting between cooperative-like to competitive-like states, said Ardeshir Kianercy, Ph.D., a postdoctoral researcher in Pienta’s lab. “To study tumor cells in isolation is not enough,” he noted. “It makes sense to study their behavior and relationship with other cells and how they co-evolve together.”
In their research, the Johns Hopkins scientists used mathematical and computer tools to set up game parameters based on biological interactions between two types of tumor cells, one oxygen-rich and the other oxygen-poor. Cells within a tumor engage in different types of energy metabolism depending on how close they are to an oxygen-rich blood supply. Tumor cells in oxygen-poor areas use the sugar glucose to produce energy and, as part of the process, release a compound called lactate. Oxygen-rich cells use this lactate in a different type of energy metabolism process and, as a result, release glucose that can be used by oxygen-poor cells to burn for their own energy.
Generally, the process is an efficient partnership that can help a tumor thrive, but the partnership is always changing as the tumor cells mutate. The mutation rate influences the strength of the energy partnerships between the oxygen-rich and oxygen-poor cells and levels of glucose and lactate production and uptake, according to the scientists.
Applying game theory calculations that accounted for the tumor cells’ mutation rates and potential glucose and lactate levels, the scientists found that within certain ranges of mutation rates, “there are critical transitions when a tumor suddenly switches between different types of energy metabolic strategies,” Kianercy said. This switch in the playbook of energy production tactics may happen when tumors progress and spread.
The scientists think tumors might be especially vulnerable within this window of strategy-switching, making it a potentially ideal time for clinicians to disrupt the tumor’s environment and wreck the partnership among its cells.
Some tumor cells, for instance, may provoke the normal cells around them to release lactate for fuel. A therapy that disrupts lactate transport to the tumor cells during a critical transition “could push a tumor to a condition where cells are not cooperating with each other,” Kianercy explained. “And if they become non-cooperative, they are most likely to stay in that state and the tumor may become more vulnerable to anti-cancer therapies.”
Pienta said it isn’t clear yet whether this type of metabolic cooperation occurs in all tumors. But the game theory model used in the study gives scientists a new way to understand how cancers may progress. “We ultimately want to test how we can interrupt this process with therapies for cancer patients,” he said.
Robert Veltri, Ph.D., of the Brady Urological Institute was also involved in the study, which was supported by the National Institutes of Health’s National Cancer Institute (U54CA143803).