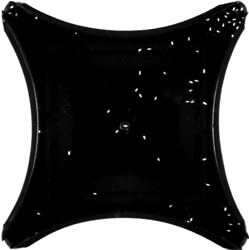 In what they say was a lucky and unexpected finding, researchers at Johns Hopkins say they’ve discovered that male fruit flies lay down an odorant, or pheromone, that not only attracts females to lay eggs nearby, but also guides males and females searching for food. The discovery, they say, offers clues about how flies, and probably other creatures, navigate complex environments and use odors to guide important behavioral decisions.

“We didn’t know flies could rapidly deposit pheromones in response to odors, but now we have evidence that that’s the case with at least three such food odors,” says Christopher Potter, Ph.D., assistant professor of neuroscience at the Johns Hopkins University School of Medicine.

A summary of the research findings appeared online in the journal eLife on Sept. 30.

Specifically, he says, experiments by him and his colleagues show that the pheromone known as 9-tricosene “flags a location as an ideal place for flies to mate, settle down and have kids, so to speak. It’s a way to help them associate mating with a food source that will give their offspring a good start in life.”

According to Potter, the pheromone’s role was discovered serendipitously by graduate student Chun-Chieh Lin, who was testing a new experimental setup for use in other fly research. The setup involved placing flies in an enclosure shaped like a square that’s been “pinched” on the sides, forming four pointed quadrants, with a glass top and bottom. The enclosure is kept dark but is bathed in infrared light, which reflects off the fly bodies and allows their movements to be tracked by a special camera.

Lin infused apple cider vinegar fumes, which flies “love,” he says, into one quadrant and confirmed that they were attracted to it. He then switched off the odor infusion and switched on “clean air.” “Much to our surprise, we found that the flies were still attracted to the quadrant that previously contained the apple cider vinegar odor,” says Lin.

Knowing that flies can use pheromones to encourage grouping and aid the search for mates, the team suspected that the flies were laying down a pheromone on the glass plate.

To figure out if that was the case, along with what was inducing the flies to release the pheromone, the researchers tested a variety of other substances known to get flies to get together. Only food odors, like banana and yeast paste, got the flies to come together after the odor had been replaced with clean air.

The team then tested different combinations of flies during the apple cider vinegar phase and the clean air phase, and found that males alone were the ones depositing the pheromone, and that it was attractive to both males and females.

To learn whether the flies were indeed smelling the pheromone or just tasting it, the researchers used a series of mutant flies that lacked one set of sensory detectors — taste or smell — or the other. It turned out that the fruit flies’ aggregation behavior depended on their sense of smell.

Potter says identifying the specific pheromone itself was “a bit trickier,” but the team relied on what was known about pheromones generally and guessed that they could dissolve it off the plates using a solvent called hexane. The researchers then made sure that the hexane wash contained the pheromone by painting an E on the bottom of the enclosure with it and watching the flies’ behavior. They then captured on video (below) the flies recreating the E by spending more time along that letter-shaped “paint” than anywhere else in their enclosure.

Potter says that a recent study showed that male fruit flies make four different airborne pheromones whose chemical makeup dissolves in hexane. To pinpoint which one was responsible for the phenomenon they were seeing, the research team used a technology called gas chromatography–mass spectrometry to figure out the molecular makeup of the hexane wash. The result was 9-tricosene, whose fruit fly function was unknown at the time. But when they painted 9-tricosene in an E shape on the enclosure’s floor, the flies aggregated in a similarly patterned way to what the researchers had seen with the hexane wash.

Intrigued by the finding, Potter says, the research team wondered if 9-tricosene could be stimulating more than just fly get-togethers, since other critical behaviors — such as courtship and egg laying — also occur at food sources.

To find out, the researchers modified their fly enclosure slightly by adding a thin layer of gel to the bottom so that females could lay eggs. After males laid down 9-tricosene in response to food odors, females laid five times more eggs in the same quadrant.

Further experiments found that 9-tricosene activates the receptor protein Or7a that is found on about 20 olfactory (smell) neurons in the fly’s antennae. “The activated receptor sends a signal to the brain, which can trigger behavioral responses,” says Potter. “What’s interesting is that these olfactory neurons, because of where they are found on the fly’s ‘nose,’ were previously considered unlikely suspects to respond to pheromones, so this finding opens up a whole new set of questions about how animals behave and react to their environments.”

One potentially practical application of its findings, the team says, depends on whether mosquitoes use a similar type of odorant signaling. If so, Potter says, it’s possible that the mosquito-borne disease malaria could be fought by exploiting pheromone signals to decrease the number of mosquitoes in affected areas.

Other authors of the report include Katharine Prokop-Prigge and George Preti of the Monell Chemical Senses Center.

This work was supported by grants from the Whitehall Foundation and the National Institute of Deafness and Other Communication Disorders (R01 DC013070).