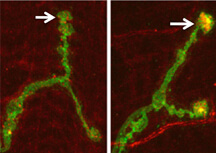 In  a report published April 26 in Neuron, the research team says it has discovered that a mutation responsible for a rare, hereditary motor neuron disease called hereditary motor neuropathy 7B (HMN7B) disrupts the link between molecular motors and the nerve cell tip where they reside. This mutation results in the production of a faulty protein that prevents material from being transported from the cell’s edge, which is located at the muscle and extends back toward its “body” in the central nervous system. In pinpointing how and where this cargo transport is disrupted, the scientists are now closer to understanding mechanisms underlying this condition and ALS.

“An important question we need to answer is how defects in proteins that normally perform important cellular functions for neurons lead to disease,” says Alex Kolodkin, Ph.D., a Howard Hughes Medical Institute Investigator and professor of neuroscience at the Johns Hopkins University School of Medicine. “A major issue in understanding neurodegenerative diseases is determining how certain proteins that are expressed in all types of neurons, or even in all cells in the body, can lead to devastating effects in one, or a few, subsets of neurons.” Kolodkin notes that many neurodegenerative diseases involve proteins that serve general functions required in nearly every type of cell in the body, including the transport of material between different parts of a cell, yet certain alterations in these proteins can result in specific neurological disorders.

One particular protein, p150glued, is known to play a role in at least two of these disorders, HMN7B, which is similar to ALS, and Perry syndrome, which leads to symptoms similar to Parkinson’s disease. p150glued is part of a larger complex of proteins that forms a molecular “motor” capable of transporting various molecules and other “cargo” from the nerve end  toward the cell body. To better understand how mutations in p150glued lead to HMN7B and Perry syndrome, the researchers turned to fruit flies, which are easy to genetically manipulate and where the same protein has been well studied.

They engineered the fruit fly p150glued protein to contain the same mutations as those implicated in the two diseases and used microscopy techniques that enable them to follow in live cells the movement of fluorescently tagged cargo along motor neurons.

They found, surprisingly, that the movement of cargo along the length of the cell was normal. However, at the far end of the cell, they found that the HMN7B-associated mutation caused an unusually large accumulation of cargo. “This was an unexpected finding,” says Thomas Lloyd, M.D., Ph.D., an assistant professor in neurology and neuroscience at the Johns Hopkins School of Medicine. “We need to better understand how this is causing disease.”

Using flies engineered to contain mutations in other motor proteins, and again watching cargo transport in live cells, the team found that p150glued works in concert with another motor to control cargo transport. Their results suggest that when p150glued is compromised, this control is lost and cargo accumulates at the nerve end, leading to disease.

“It’s still unclear how these two different mutations in different regions of the same protein cause very distinct neurodegenerative diseases,” Lloyd says. Encouraged by their results, the team plans to continue using fruit flies to unravel the molecular mechanisms underlying these diseases.

The research was funded by the Packard Center for ALS Research at Johns Hopkins, the National Institute of Neurological Disorders and Stroke (K08-NS062890, RO1-NS32385, and R01-NS35165) and the Howard Hughes Medical Institute.