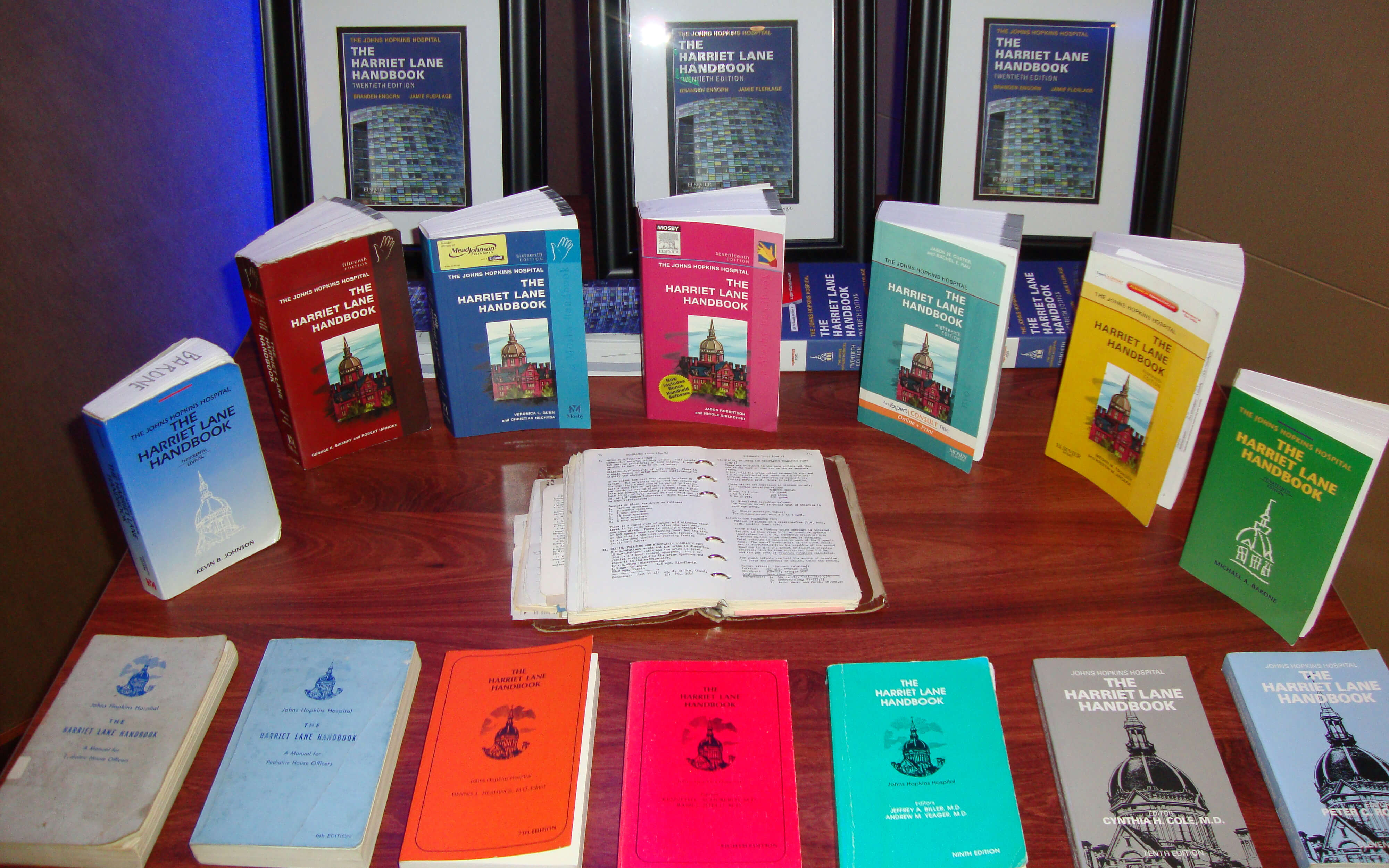 In 1953, six pediatric residents at Johns Hopkins got together and penned a pocket reference book for fellow pediatric trainees. They did so without funds, without supervision and by stealing a few precious hours at a time from their hectic clinical schedules. The idea was to create a collection of essential data that anyone caring for a child would need, helping newly minted clinicians learn the ropes and intricacies of pediatrics.

The book achieved all that, but even in their most ambitious dreams its "framers" could have not suspected that their handwritten, loose-leaf and hastily collated book would go on to become a veritable pediatrician's bible, influencing generations of doctors-in-training across the country and - with translations in some 20 languages - all over the world.

Updated every three years and published by Elsevier, this summer The Harriet Lane Handbook celebrates a milestone 20th edition and its 61st birthday.

"The Harriet Lane Handbook has played a part in the care of countless children all around the world," says George Dover, M.D., director of the Johns Hopkins Children's Center. "It is humbling and astounding to think of all the patients treated by doctors and nurses who have stood by these children's bedsides, reached in their pockets and pulled this book out to look something up."

The book's defining and most important feature is that it's written for trainees by trainees. Edited by the two chief pediatric residents at the Johns Hopkins Children's Center, the content is written by senior residents under the supervision of faculty advisers.

"A lot of textbooks are written by professors sitting at their desks trying to remember what it was like to be a resident learning to care for a patient," says Julia McMillan, M.D., executive vice chair for the Department of Pediatrics at Johns Hopkins. "The fact that residents are writing for other residents as they care for patients and as they are learning allows them to include the most relevant and useful information in real time."

A resident learning in the trenches knows what other residents need the most and what the trickiest areas might be, adds Jamie Flerlage, M.D., chief pediatric resident and 20th edition co-editor.

"Residents have intimate knowledge of what exactly other residents need because they have either been through it or are going through it," says Flerlage, who will be resuming a pediatric oncology fellowship this summer at St. Jude's Children's Research Hospital in Memphis, Tennessee.

Perhaps one of the most challenging aspects of residency training, Flerlage says, is the initial differential diagnosis and figuring out what tests are needed to rule out or confirm certain conditions. Another often-excruciating exercise is calculating age-based drug dosing and memorizing what drugs work best for which disease at what dose for how long.

"The Lane," as it's fondly called by pediatric trainees, is a concise, yet comprehensive manual that contains some of the most important pearls of wisdom in pediatric care. It is predominantly used by pediatricians, but also by family physicians, emergency room doctors and nurse practitioners without extensive training in pediatrics who see the occasional child in clinic. The book's 31 chapters, divided into four parts, cover the ABCs of all pediatric subspecialties along with the latest treatment recommendations and guidelines. Other subjects include treatment of poisonings, burns and spotting subtle signs of child abuse in clinic or in the emergency room. The book also provides fingertip references to age-based blood pressure charts, immunization schedules and values for blood chemistries and levels of certain proteins in a child's cerebro-spinal fluid, or CSF. A clinician's ability to rapidly assess blood chemistry and CSF values can mean the difference between life and death in pediatric care. The reference ranges generated automatically by labs as part of blood test reports are often irrelevant as they do not factor in a child's age. What may be a normal hemoglobin value in a 16-year-old could be a glaring red flag in a 2-year-old.

One of the most used sections of the book is its comprehensive drug formulary with its age-based drug dosing instructions. Conceived and regularly updated by chief pediatric pharmacist Carlton Lee, the formulary represents a comprehensive database. Keeping it up to date is a Herculean effort, say the book's editors, because of the hundreds of new medications entering the market each year, only a handful of which are tested in children.

Changes in the book's content over the years have mirrored important shifts in our understanding of childhood disease. For example, the debut edition contained tips on smallpox immunizations and the basics of treating children with measles and congenital rubella. Sixty years later, the latest edition contains information on incorporating genetic testing into the clinic - something pediatricians in the 1950s deemed close to science fiction.

Another marker of the progress of science, McMillan says, is leukemia treatment. In the 1950s, most children with the acute form of this common childhood blood cancer died. Today, nearly all of them achieve a long-term cure due to highly effective therapy. On the flip side, type 2 diabetes, once deemed a strictly adult disease, is now affecting more and more children.

Changes specific to the latest edition of The Harriet Lane Handbook include an updated photo atlas for pediatric radiology, new practices on neonatal and pediatric septic shock and updated guidelines for the management of severe brain injury, among others.

One of the most striking and immediately recognizable changes, however, is the book's cover. It features The Charlotte R. Bloomberg Children's Center, which opened in 2012, instead of the all too familiar "shaky" crayon-drawn dome of the historic Johns Hopkins Hospital.

"The new cover commemorates our 100th year anniversary as the birthplace of academic pediatrics, but also the dawn of the next century in pediatric care at Johns Hopkins," says Branden Engorn, M.D., pediatric chief resident and book co-editor.

Despite all the changes in pediatric medicine captured in The Harriet Lane Handbook over the last six decades, the fundamentals of pediatrics, its philosophical underpinnings, have remained relatively constant. The critical questions that pediatricians pondered half a century ago continue to occupy the minds of novice doctors today. Thus, it is only befitting that the book opens with a now-classic quote from legendary Johns Hopkins pediatrician and geneticist Barton Childs: "Why this child? Why this disease? Why now?"

Uttered more than 50 years ago, Childs' words urged young pediatricians to think critically about disease, to question the origins of disease and to elucidate the individual patient factors that shape each child's unique clinical course and outcome.

"Dr. Childs taught us that a child's disease is not random but fueled by a combination of factors such as the patient's genetic make-up, social environment and the pathology of the disease itself," says Engorn, who will stay at Johns Hopkins to complete a fellowship in pediatric critical care.

Asking those questions, Engorn says, can illuminate new understanding of the disease process as well as new therapies.