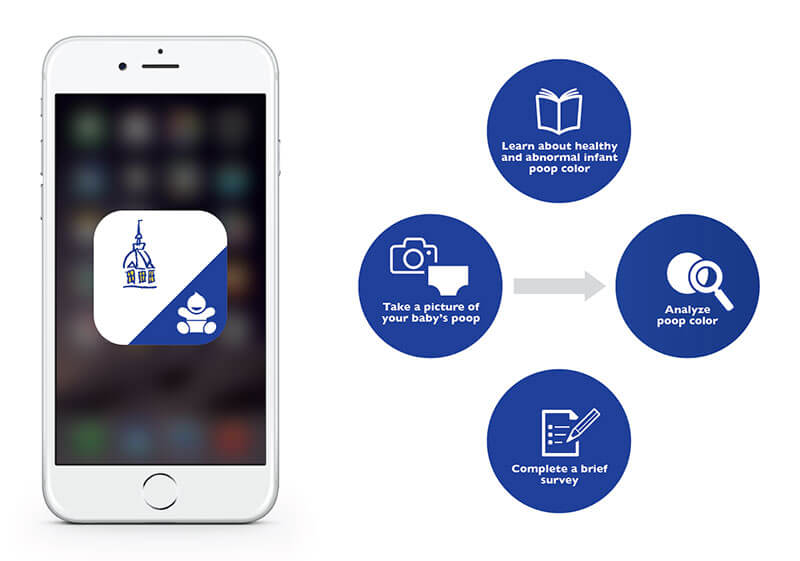 PoopMD is available for Apple and Android smart phone users, and analyzes the fecal colors of photos parents take of the content of their babies’ diapers.
Credit: Johns Hopkins Medicine

A free smart-phone app, developed by Johns Hopkins researchers to help screen for a rare but life-threatening liver disorder in babies, has been modified for users as part of a trial designed to learn whether information delivered by the app, now known as PoopMD+, ultimately leads to better diagnosis and treatment.

The newly equipped data collection piece of the app should, the researchers say, help them determine ways to get an early diagnosis for biliary atresia, a disease whose outcome largely depends on how early in their lives affected babies receive treatment.

Biliary atresia, which affects about one in 14,000 newborns, or some 400 newborns in the United States each year, occurs when the liver’s bile ducts don’t develop properly, preventing bile — a digestive fluid — from exiting the liver and entering the digestive tract.

The first line of treatment for biliary atresia, which causes nearly half of all cases of pediatric end-stage liver disease in the U.S., involves surgery to repair bile ducts and restore bile flow to prevent irreversible liver damage. The best outcomes are seen when the surgery is done in the first month of life. However, this critical window is often missed, researchers say, with time to diagnosis in the U.S. averaging 70 days.

“Research shows that the vast majority of Americans of childbearing age have a smart phone,” says Douglas Mogul, M.D., M.P.H., assistant professor of pediatrics at the Johns Hopkins University School of Medicine. “We want to turn those smart phones into a powerful tool to get children with biliary atresia the treatment that they need faster.”

The app Mogul and his team originally developed — called PoopMD — is based on the fact that, although babies exhibit few signs of biliary atresia right after birth, one valuable clue is their poop color. In patients with the condition, poop is typically a very pale yellow or chalky grey. Originally released in 2014, PoopMD is available for Apple and Android smart phone users, and analyzes the fecal colors of photos parents take of the content of their babies’ diapers. The app is designed to alert parents and other caregivers to the telltale hues of biliary atresia, and they can use the app to send suspect photos and results of the app’s analysis to their children’s pediatricians.

Although a 2015 study, described in PLOS ONE, validated the app’s accuracy, it’s been unclear what parents are doing with the generated information, says Mogul.

To find out if the app is triggering meaningful behavior, Mogul, colleagues and the digital health company Beneufit have updated the 2014 version to incorporate ResearchKit, a platform developed by Apple that allows researchers to solicit informed consent from app users and collect the non-aggregated, de-identified data they generate for use in research. Of the 14 apps currently using ResearchKit, the updated version of PoopMD is only the second targeted toward a childhood disease and the first meant for use with a presumably healthy population to screen for a potential health problem. This new version of the app, renamed PoopMD+, was funded by The Pershing Square Foundation.

In this version, after an initial use, users will automatically receive a questionnaire four weeks later asking what they did with the generated information: Did they go to the doctor? If so, what did the doctor do? Did the app’s analysis cause anxiety, even if it suggested a child’s stools were normal?

The questions, Mogul says, take just a few minutes to answer but have the potential to help scientists learn the best route to early diagnosis and treatment for biliary atresia.