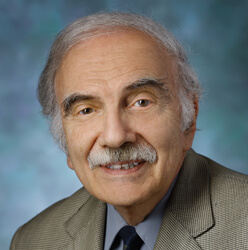 The names of the awardees were published in the “AAAS News and Notes” section of Science on Nov. 29. The newly elected fellows will be awarded a certificate and a rosette pin during the AAAS Fellows Forum at the 2014 AAAS annual meeting in Chicago on Saturday, Feb. 15.

L. Mario Amzel, Ph.D., is a professor and director of the Department of Biophysics and Biophysical Chemistry. He was elected for his distinguished contributions to the understanding of protein structure and function, especially as is relevant to the immune system, infectious disease and cancer. His research team studies the chemistry of reactions carried out by enzymes. By determining the three-dimensional structures of these proteins and the conditions that affect their efficiency, they are able to figure out the roles they play in the body. Some of the information they gather is being used to design drugs targeting the enzymes.

Philip Cole, M.D., Ph.D., is the E.K. Marshall and Thomas H. Maren Professor and director of the Department of Pharmacology and Molecular Sciences. He is being recognized for his distinguished contributions to the field of chemical biology, particularly the development and applications of chemical approaches to understanding protein structure and functions. His laboratory studies the way in which the addition of small chemical groups affects the functioning of proteins. His work has broad implications for everything from cellular signaling to gene regulation to metabolism.

Valina Dawson, Ph.D., is a professor in the Department of Neurology and director of the Neuroregeneration Program in the Institute for Cell Engineering. She was elected for discoveries regarding nerve cell death and survival, especially what her team learned about molecular chain reactions that govern both. These reactions involve the signaling molecules nitric oxide, poly (ADP-ribose) polymerase and other proteins that contribute to Parkinson's disease. Her work is helping us to understand why nerve cells die due to disease or trauma and what we can do to boost the body’s ability to replace them.

Stephen Murray, Ph.D., is a Research Professor in the Department of Physics and Astronomy, where he teaches and carries out research in high-energy astrophysics and X-ray astronomy. He was elected for innovative contributions to high-resolution X-ray imaging spectroscopy, and for founding the NASA Astrophysics Data System that has transformed the way we access information. The data system, used by virtually all astronomers and astrophysicists worldwide, has provided free access to the published literature in their field. As the lead researcher in charge of developing X-ray technologies for several of NASA’s space mission projects, Murray helped develop X-ray imaging detectors that were successfully flown on several space missions. He is currently working to design tools for studying the small bodies of the outer solar system.

On the Web:
AAAS Fellows

Philip Cole, on studying intricate chemical changes in proteins that affect how they behave in cells [with VIDEO]

Valina Dawson, on preventing cell death in the brain [with VIDEO]