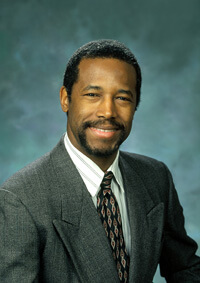 
Each year the Institute of Medicine elects 65 new members based on service excellence and career achievement. The newly elected individuals will contribute to the IOM’s mission to act as unbiased advisors to law makers and the public for the purpose of improving health.

Carson is the inaugural recipient of the Benjamin S. Carson Sr., M.D. and Dr. Evelyn Spiro, R.N. Professor of Pediatric Neurosurgery at the Johns Hopkins School of Medicine, and he has directed pediatric neurosurgery at the Johns Hopkins Children’s Center for more than 25 years.  In 1987, Carson led the first and only successful separation of twins joined at the back of the head and has since led other types of successful separations and procedures dealing with conjoined twins. Carson holds more than 60 honorary doctorate degrees. In 2008, President Bush presented Dr. Carson with the Ford’s Theatre Lincoln Medal and the Presidential Medal of Freedom, the highest civilian honor in the United States.

Greider is the Daniel Nathans Professor and director of the Department of Molecular Biology and Genetics at the Johns Hopkins Institute for Basic Biomedical Sciences at the Johns Hopkins School of Medicine. As a graduate student, she discovered the enzyme telomerase, which preserves the end of chromosomes and gives cells a finite life span. She continues research on telomerase by studying how its activity is awry in cancer cells. Greider has accrued much recognition for her achievements during her career. However, her most esteemed awards are the 2009 Nobel Prize in Medicine and the 2006 Albert Lasker Award. She is a fellow of the American Academy of Microbiology, the American Association for the Advancement of Science and a member of the National Academy of Sciences.

Johns is a professor and former director of Anesthesiology and Critical Care Medicine and a professor of pulmonary medicine and critical care at Johns Hopkins University School of Medicine. His research involves using genomic and proteomic approaches to diagnose and determine the cause of high blood pressure in the lungs. He also studies the molecular mechanisms of pain, anesthesia and analgesia. Johns is a recent Institute of Medicine Robert Wood Johnson Health Policy Fellow and worked on Capitol Hill in the 109th Congress as a health policy advisor in the U.S. Senate in the office of Sen. Orrin Hatch. His current policy interests concern health care reform, comparative effectiveness and coverage decisions for new medical technologies, and pathways for approval of biogeneric drugs.

Sugarman is the Harvey M. Meyerhoff Professor of Bioethics at the Berman Institute of Bioethics and the Department of Medicine at The Johns Hopkins University. He is an internationally recognized leader in the field of biomedical ethics, especially the ethics of research in human beings. He has particular expertise in the application of empirical methods and evidence-based standards for the evaluation and analysis of bioethical issues. His seminal contributions to both medical ethics and policy include his work on the ethics of informed consent, umbilical cord blood banking, stem cell research, international HIV prevention research and research oversight. He currently serves on the Maryland Stem Cell Research Commission, chairs the Ethics Working Group of the HIV Prevention Trials Network and is the ethics officer for the Resuscitation Outcomes Consortium. Sugarman is also a member of the American Society of Clinical Investigation and a fellow of the American Association for the Advancement of Science, the American College of Physicians and the Hastings Center.