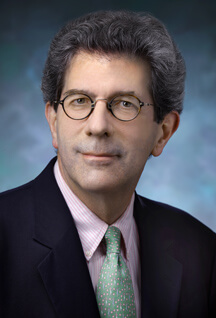 The Association of American Physicians (AAP) has elected Johns Hopkins researchers Stephen Desiderio, Hal Dietz, Drew Pardoll, Jeremy Sugarman and David Valle as new members. Founded in 1885, the nonprofit, professional organization works to advance medical research and its application to practice. The names of this year’s new members will be announced April 26 at AAP’s annual joint meeting with the American Society for Clinical Investigation in Chicago.

More about the five new members:

Desiderio’s research team has made numerous contributions to our understanding of how immunity develops in health and disease. His work has helped to shape our understanding of how the immune system is able to respond to a spectacularly diverse set of invaders. His team’s studies have shed light on the relationship between genetic rearrangement — the process by which immune diversity is generated —  and the development of leukemia. The team has also discovered key elements of the triggers that turn on immune responses, and most recently has turned its attention to signals that instruct stem cells to become cells of the immune system.

Desiderio currently serves on the editorial board of the Journal of Molecular Medicine and was appointed by the governor to the Maryland Life Sciences Advisory Board in 2007. He is a past member of the Board of the European Genetics Foundation in Bologna, Italy, and the Maryland Task Force to Study Nanobiotechnology. He has served on the NIH study section on allergy and immunology and as a scientific reviewer for a number of NIH intramural programs, most recently the National Human Genome Research Institute and the National Institute on Aging.

Harry C. “Hal” Dietz III, M.D., is the Victor A. McKusick Professor of Genetics and Medicine at the McKusick-Nathans Institute of Genetic Medicine at Johns Hopkins and an investigator with the Howard Hughes Medical Institute. A pediatric cardiologist and geneticist, he also directs the William S. Smilow Center for Marfan Syndrome Research at Johns Hopkins and has devoted his career to understanding and improving quality of care for children with Marfan syndrome. Marfan is a potentially fatal connective tissue disease that causes an enlargement of the aorta, the major blood vessel leaving the heart, making it likely to tear or burst.

Through family studies in the late 1980s, Dietz's research team linked an error in the gene that encodes fibrillin-1, a connective tissue protein, to Marfan syndrome. They have since found or helped find the genes underlying four other conditions that cause aortic aneurysms, including Loeys-Dietz syndrome, named after Dietz and another Johns Hopkins scientist, Bart Loeys. More recently, his team has identified a potential treatment for Marfan syndrome, the drug losartan (Cozaar). In 2007, a clinical trial was launched to test losartan for its ability to slow aortic growth.

Drew Pardoll, M.D., Ph.D., is a Martin D. Abeloff Professor. He is director of cancer immunology at the Sidney Kimmel Comprehensive Cancer Center. Pardoll completed his M.D., Ph.D, medical residency and oncology fellowship at The Johns Hopkins University. He has published over 250 papers and more than 20 book chapters on the subject of T cell immunology and cancer vaccines. He has served on the editorial board of the Journal of the National Cancer Institute and Cancer Cell, and has served as a member of scientific advisory boards for the Cancer Research Institute, the University of Pennsylvania’s Institute for Human Gene Therapy, the Biological Resources Branch of the National Cancer Institute, the Dana-Farber/Harvard Cancer Center, Cerus Corporation, Genencor, Cell Genesys, Mojave Therapeutics, the American Society of Clinical Oncology and the American Association for Cancer Research.

Pardoll has made a number of advances in cellular Immunology, including the discovery of gamma/delta T cells, NKT cells and interferon-producing killer dendritic cells. Over the past two decades, Pardoll has studied molecular aspects of dendritic cell biology and immune regulation, particularly related to mechanisms by which cancer cells evade elimination by the immune system. He is an inventor of a number of immunotherapies, including GVAX cancer vaccines and Listeria monocytogenes-based cancer vaccines.

Jeremy Sugarman, M.D., M.P.H., M.A., is the Harvey M. Meyerhoff Professor of Bioethics and Medicine, professor of medicine, professor of health policy and management, and deputy director for medicine at the Berman Institute of Bioethics at The Johns Hopkins University. He is an internationally recognized leader in the field of biomedical ethics, and has worked on such issues as the ethics of informed consent, umbilical cord blood banking, stem cell research, international HIV prevention research, global health and research oversight.

Sugarman has authored over 200 articles, reviews and book chapters, as well as edited or co-edited four books. He has served as senior policy and research analyst for the White House Advisory Committee on Human Radiation Experiments, consultant to the National Bioethics Advisory Commission, senior adviser to the Presidential Commission for the Study of Bioethical Issues, and completed a six-year term on the Maryland Stem Cell Research Commission.

Sugarman currently serves on the Scientific and Research Advisory Board for the Canadian Blood Services, the Ethics and Public Policy Committee of the International Society for Stem Cell Research, and the board of directors of Public Responsibility in Medicine and Research (PRIM&R). He is co-chair of the Johns Hopkins Institutional Stem Cell Research Oversight Committee. In addition, he is chair of the Ethics Working Group of the HIV Prevention Trials Network and is the ethics officer for the Resuscitation Outcomes Consortium.

David Valle, M.D., is the Henry J. Knott Professor and Director of the McKusick-Nathans Institute of Genetic Medicine. He is a professor of pediatrics, ophthalmology and molecular biology and genetics. Valle has been on the faculty at Johns Hopkins for more than 20 years and currently is the director of the Predoctoral Training Program in Human Genetics as well as the founding director of the Johns Hopkins Center for Inherited Disease Research. He has published more than 225 papers and 40 book chapters. He is the senior editor of The Metabolic and Molecular Bases of Inherited Disease, a member of the Institute of Medicine of the National Academies and the chair of the Board of Scientific Counselors of the Jackson Laboratory.

Valle is interested in the genetic contributions to health and disease. Over the years, his laboratory has discovered the genetic causation for more than 20 diseases including those responsible for inborn errors of metabolism, inherited retinal degeneration, disorders of cellular organelle biogenesis and genetic variation that contributes risk for common disorders such as schizophrenia. He is also committed to excellence in the education of medical and graduate students as well as the public, especially with regard to genetics and genomics.