First Step of Metastasis Halted in Mice with Breast Cancer 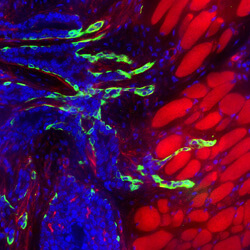 Cell biologists at Johns Hopkins have identified a unique class of breast cancer cells that lead the process of invasion into surrounding tissues. Because invasion is the first step in the deadly process of cancer metastasis, the researchers say they may have found a weak link in cancer's armor and a possible new target for therapy. A summary of their results will be published online in the journal Cell on Dec. 12.

"Metastasis is what most threatens breast cancer patients, and we have found a way to stop the first part of the process in mice," says Andrew Ewald, Ph.D., assistant professor of cell biology at the Johns Hopkins School of Medicine.

Before metastasis occurs, single cells on the edge of a tumor, termed leader cells, form protrusions into the surrounding tissue, like someone dipping a toe in to test the water before deciding to venture farther, Ewald says. If the conditions are right, the leader cells act as guides, with many tumor cells following behind, as they escape the confines of the tumor into the healthy tissue beyond. Full metastasis occurs when the cells succeed in migrating to a new location — the lungs, for example — and set up shop, creating a new tumor.

Beginning with the idea that some cells in the tumor might be more invasive than others, Ewald's team grew mouse tumors in the laboratory in special 3-D gels that mimic the environment that surrounds breast tumors in human patients. Kevin Cheung, M.D., a medical oncology fellow in the Ewald lab, observed that the cancer cells infiltrated the gels in groups, with a few cells out in front and the rest following behind.

Looking for a molecular cause for the apparent “leadership” seen in the initiating cells, Cheung searched for proteins that were uniquely present in the leader cells. They identified one protein, cytokeratin 14, or K14, that was present in almost all leader cells but was very rare in the noninvasive parts of the tumor. When the team looked at tumors from mice that had other types of breast cancer — some more prone to invasion and others less prone — all had leader cells containing K14. The more invasive a tumor was, the more cells with K14 it had.

K14 is a protein that helps form the internal "skeleton" of many cell types, giving them structure and helping them to move. Although its presence in leader cells made its involvement in the invasion process seem likely, the investigators conducted further experiments to determine whether it was essential to the process or merely coincidental to it.

After letting the tumors grow for some time, the team removed and examined them. As expected, in the control group, leader cells were present, contained K14 and were leading vigorous invasions into normal tissue. In the experimental tumors, whose cells had no K14, the tumor borders were smooth, with essentially no invasions occurring.

"We’re still several years away from being able to use these insights to help patients with breast cancer, but we now know which tumor cells are the most dangerous, and we know some of the proteins they rely on to do their dirty work," says Ewald. "Just a few leader cells are sufficient to start the process of metastasis, and they require K14 to lead the invasion."

He also notes that K14 is present in cells within many other organs, so K14 may play a similar role in other types of cancer.

Other authors of the report include Edward Gabrielson of the Johns Hopkins University School of Medicine and Zena Werb of the University of California, San Francisco.

Link to article in Cell

Related Stories:
Andy Ewald on having the right tools to watch an epithelial tissue remodel its architecture

How some breast cancers alter their sensitivity to estrogen