Star-shaped brain cells “eavesdrop” on neurons, but only when primed
Release Date: June 18, 2014 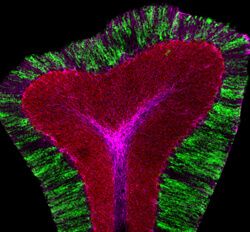 1 2
Astrocyte activity is shown in green in this slice of tissue from the brain region that controls movement in mice. Internal, structural elements of the astrocytes are shown in magenta; cell bodies are in red.
Credit: Amit Agarwal and Dwight Bergles, courtesy of Cell Press

A new study from The Johns Hopkins University shows that the brain cells surrounding a mouse’s neurons do much more than fill space. According to the researchers, the cells, called astrocytes because of their star-shaped appearance, can monitor and respond to nearby neural activity, but only after being activated by the fight-or-flight chemical norepinephrine. Because astrocytes can alter the activity of neurons, the findings suggest that astrocytes may help control the brain’s ability to focus.

The study involved observing the cells in the brains of living, active mice over long periods of time. A combination of genetically engineered mice and advanced microscopy allowed the researchers to visualize the activity of astrocyte networks in different regions of the brain to learn how these abundant supporting cells are controlled.

The scientists monitored astrocytes in the area of the brain responsible for controlling movement and saw that the cells often increased their activity as the mice walked on treadmills — but not always, and sometimes astrocytes became active when the animals were not moving. This lack of consistency suggested to the researchers that the astrocytes were not responding to nearby neurons, as had been thought.

Similarly, astrocytes in the vision processing area of the brain did not necessarily become active when the mice were stimulated with light, but they were sometimes active, even in the dark. The team solved both mysteries when they tested the idea that the astrocytes needed a signal to “wake them up” before they could respond to nearby neurons. That is how they found that norepinephrine, the brain’s broadly distributed fight-or-flight signal, primes the astrocytes in both locations to “listen in” on nearby neuronal activity.

“Astrocytes are among the most abundant cells in the brain, but we know very little about how they are controlled and how they contribute to brain function,” says Dwight Bergles, Ph.D., professor of neuroscience, who led the study. “Since memory formation and other important functions of the brain require a state of attention, we’re interested in learning more about how astrocytes help create that state.”

For example, Bergles says, “We know that astrocytes can regulate local blood flow, provide energy to neurons and release signaling molecules that alter neuronal activity. They could be doing any or all of those things in response to being activated. It is also possible that they act as a sort of megaphone to broadcast local norepinephrine signals to every neuron in the brain.” Whatever the case may be, researchers now know that astrocytes are not idle loiterers. This ability to study astrocyte network activity in animals as they do different things will help to reveal how these cells contribute to brain function.

This research was published in the journal Neuron on June 18.

We are providing these photos with the understanding that they will be used only to help illustrate the story in the corresponding news release. Please include the appropriate credit information. If there is anything else you need, please email us at JHMedia@jhmi.edu. Thank you.