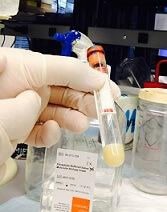 Johns Hopkins Kimmel Cancer Center investigators report they have designed a blood test that accurately detects the presence of advanced breast cancer and also holds promise for precisely monitoring response to cancer treatment.
The test, called the cMethDNA assay, accurately detected the presence of cancer DNA in the blood of patients with metastatic breast cancers up to 95 percent of the time in laboratory studies. The findings were described in the April 15 issue of the journal Cancer Research.
Currently, there is no useful laboratory test to monitor patients with early stage breast cancer who are doing well, but could have an asymptomatic recurrence, says Saraswati Sukumar, Ph.D., who is the Barbara B. Rubenstein Professor of Oncology and co-director of the Breast Cancer Program at the Johns Hopkins Kimmel Cancer Center. Generally, radiologic scans and standard blood tests are indicated only if a woman complains of symptoms, such as bone aches, shortness of breath, pain, or worrisome clinical exam findings. Otherwise, routine blood tests or scans in asymptomatic patients often produce false positives, leading to additional unnecessary tests and biopsies, and have not been shown to improve survival outcomes in patients with early stage breast cancer who develop a recurrence.
Sukumar, also a professor of pathology at Johns Hopkins, says that the current approach to monitoring for recurrence is not ideal, and that “the goal is to develop a test that could be administered routinely to alert the physician and patient as soon as possible of a return of the original cancer in a distant spot. With the development of cMethDNA, we’ve taken a first big step toward achieving this goal.”
To design the test, Sukumar and her team scanned the genomes of primary breast cancer patients, as well as DNA from the blood of metastatic cancer patients. They selected 10 genes specifically altered in breast cancers, including newly identified genetic markers AKR1B1, COL6A2, GPX7, HIST1H3C, HOX B4, RASGRF2, as well as TM6SF1, RASSF1, ARHGEF7, and TMEFF2, which Sukumar’s team had previously linked to primary breast cancer.
The test, developed by Sukumar, collaborator Mary Jo Fackler, Ph.D., and other scientists, detects so-called hypermethyation, a type of chemical tag in one or more of the breast cancer-specific genes present in tumor DNA and detectable in cancer patients’ blood samples. Hypermethylation often silences genes that keep runaway cell growth in check, and its appearance in the DNA of breast cancer-related genes shed into the blood indicates that cancer has returned or spread.
In one set of experiments, the researchers tested the assay’s ability to detect methylated tumor DNA in 52 blood samples – 24 from patients with recurrent stage IV breast cancer and 28 from healthy women without breast cancer, and again in blood samples from 60 individuals – 33 from women with all stages of breast cancer and 27 from healthy women. In each case, the blood test was up to 95 percent accurate in distinguishing patients with metastatic breast cancer from healthy women.
The investigators also studied the assay’s potential to monitor response to chemotherapy. They evaluated 58 blood samples from 29 patients with metastatic breast cancer, some taken before the initiation of therapy and some taken 18 to 49 days after starting a new chemotherapy regimen. In as little as two weeks, they report, the test detected a significant decrease in DNA methylation in patients with stable disease or in those who responded to treatment; this decrease was not found in patients whose disease progressed or who did not respond to treatment.
“Our assay shows great potential for development as a clinical laboratory test for monitoring therapy and disease progression and recurrence,” Sukumar says. If it’s determined early that a treatment is not working, clinicians can save time and switch to a different therapy, she says.
In addition, the researchers tested the gene panel used in the cMethDNA assay against samples from The Cancer Genome Atlas, a catalog of genes in various cancer types, finding that the gene panel may also be useful in detecting recurrent lung or colorectal cancers but not as accurate in detecting recurrent ovarian, kidney or stomach cancers.
There is a patent pending on the test, says Sukumar, who is planning additional studies to validate the current findings and compare its ability to predict recurrence with that of current imaging tests.
Co-authors of the study were Mary Jo Fackler, Zoila Lopez Bujanda, Christopher Umbricht, Wei Wen Teo, Soonweng Cho, Zhe Zhang, Kala Visvanathan, Stacie Jeter, Pedram Argani, Chenguang Wang, Leslie Cope and Antonio C. Wolff of Johns Hopkins; Jaclyn P. Lyman, Marina de Brot and Tari A. King of Memorial Sloan-Kettering Cancer Center, New York; James N. Ingle and Judy Boughey of Mayo Clinic, Rochester, Minn.; Kandace McGuire of the University of Pittsburgh Medical Center; and Lisa A. Carey of the University of North Carolina, Chapel Hill. The test was developed with help from the Translational Breast Cancer Research Consortium.
The work was supported by the Avon Foundation for Research, the Rubenstein family, the John A. Sellon Charitable Trust, the Department of Defense Center of Excellence on “Targeting Metastatic Breast Cancer,” Avon/National Cancer Institute (CA006973-41S), the Susan G. Komen for the Cure, the Breast Cancer Research Foundation, and the National Institutes of Health’s National Cancer Institute’s Core grant to the Kimmel Cancer Center (CA006973).
As seen in the 2016 Biennial Report. Learn more.