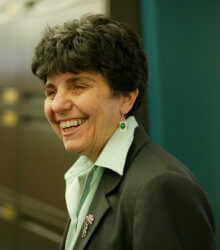 Renowned Johns Hopkins Children’s Center pediatrician and former JAMA editor Catherine D. DeAngelis, M.D., M.P.H., will receive the 2015 Howland Medal of the American Pediatric Society, one of the highest awards in pediatric medicine, bestowed annually for distinguished service in the field as a whole.

DeAngelis will receive the Howland Medal award at the American Pediatric Society members’ dinner in San Diego on April 26.

Described by peers as one of the most influential voices in modern medicine, DeAngelis was instrumental in reshaping the rules of ethical conduct in medicine, increasing transparency in clinical research, improving gender equality and enhancing medical education.

Named in honor of Dr. John Howland, the second director of pediatrics at the Johns Hopkins University School of Medicine, the award, with its accompanying medal, was first given out in 1952 and has been given to leaders in academic pediatrics for significant clinical, educational and scientific contributions to improve the lives of children and advance the profession of pediatrics.

“This honor could have not gone to a more deserving individual. Dr. DeAngelis is a brilliant pediatrician as well as a passionate advocate of children’s rights, a prolific researcher and a transformational educator.” says Paul B. Rothman, M.D., dean of the medical faculty and CEO of Johns Hopkins Medicine. “Her work has profoundly altered the field of pediatric medicine and catalyzed changes well beyond it.”

“Dr. DeAngelis joins an illustrious line of Johns Hopkins luminaries who have received the award, including world renowned pediatric cardiologist Helen Taussig, legendary geneticist Barton Childs and visionary pediatrician Robert Cooke. Cathy fully deserves to be part of that group,” notes George Dover, M.D., pediatrician-in-chief and director of the Johns Hopkins Children’s Center. “Her life’s work has been a formidable journey. She has pushed boundaries and transformed pediatrics on multiple fronts: in the clinic, in the classroom, on the research front and beyond.”

Entering medicine as a registered nurse, De Angelis went on to become a pediatrician, an educator and a prolific researcher. DeAngelis received her medical degree from the University of Pittsburgh’s School of Medicine and completed her pediatric residency at The Johns Hopkins Hospital.  DeAngelis worked as a pediatrician in a community clinic in Boston and earned a master’s degree in public health from Harvard University. In 1978, she returned to Johns Hopkins to become the founding director of the Division of General Pediatrics and Adolescent Medicine.

In 1986, DeAngelis attained the status of full professor, becoming the 12th woman at the Johns Hopkins University School of Medicine to do so. During her nine-year tenure as vice dean for academic affairs and faculty at Johns Hopkins, DeAngelis launched several initiatives to improve women’s presence in academic medicine, including the annual School’s Report on the Status of Women, which later became the Committee on Faculty Development and Gender. DeAngelis was also the catalyst behind the restyling of the medical school curriculum to include immediate contact with patients, as well as studies in empathy and compassion — traits she deemed just as critical for a physician as scientific knowledge.

DeAngelis has received seven honorary doctorate degrees and has received numerous awards for humanitarianism and medical excellence, including a lifetime achievement award by the American Association of Medical Colleges.