Many with dizziness and headaches sent home with missed diagnoses
Release Date: April 3, 2014 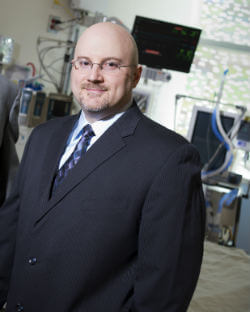 Analyzing federal health care data, a team of researchers led by a Johns Hopkins specialist concluded that doctors overlook or discount the early signs of potentially disabling strokes in tens of thousands of American each year, a large number of them visitors to emergency rooms complaining of dizziness or headaches.

The findings from the medical records review, reported online April 3 in the journal Diagnosis, show that women, minorities and people under the age of 45 who have these symptoms of stroke were significantly more likely to be misdiagnosed in the week prior to sustaining a debilitating stroke. Younger people in the study were nearly seven times more likely to be given an incorrect diagnosis and sent home without treatment despite such symptoms.

“It’s clear that ER physicians need to be more discerning and vigilant in ruling out stroke, even in younger people,” says study leader David E. Newman-Toker, M.D., Ph.D., an associate professor of neurology at the Johns Hopkins University School of Medicine. “Although stroke is less common in this demographic, we need to be more attuned to the possibility, particularly when the presenting complaint is dizziness or headache.”

Newman-Toker says he believes his research, which used Healthcare Cost and Utilization Project data from nine states for the years 2008–2009, is the first large-scale study to quantify stroke misdiagnosis. His team linked inpatient discharge records and emergency department visit records from 187,188 patients and 1,016 hospitals. They found that up to 12.7 percent of people later admitted for stroke had been potentially misdiagnosed and erroneously sent home from an ER in the 30 days preceding stroke hospitalization. Those misdiagnosed disproportionately presented with dizziness or headaches and were told they had a benign condition, such as inner ear infection or migraine, or were given no diagnosis at all. About half of the unexpected returns for stroke occurred within seven days, and more than half of these occurred in the first 48 hours.

Nationwide, the estimated number of missed strokes resulting in harm to patients, based on the new data, could be anywhere between 15,000 and 165,000 annually, though Newman-Toker believes the number is likely between 50,000 and 100,000 a year. He notes that more specific numbers are difficult to estimate because of shortcomings in the health data routinely reported by the states.

Newman-Toker says early diagnosis and quick treatment of strokes are critical to the long-term health of patients having a transient ischemic attack (TIA) — a so-called “ministroke” or “pre-stroke” — because these temporary, non-disabling conditions are often a harbinger of a catastrophic bleed or clot in the brain that can lead to death or permanent disability just days later without appropriate treatment. Americans suffer an estimated 800,000 strokes a year, and another 200,000 to 500,000 experience a TIA. Prompt and early treatment may lower the risk of a repeat stroke by as much as 80 percent, Newman-Toker says.

In an earlier study in 2013, Newman-Toker and his colleagues estimated that misdiagnoses may account for 80,000 to 160,000 preventable deaths or permanent disabilities in each year in the United States with missed neurologic conditions, such as stroke, possibly accounting for a large share of disabling cases.

He adds that the most common type of stroke is best confirmed using MRI, rather than a CT scan, which often doesn’t show brain changes early on and can be falsely reassuring. And he notes that physicians should be able to differentiate between dizziness caused by a stroke and one caused by an inner ear problem using a series of relatively simple bedside tests tracking eye movements. Taking a good history and asking patients about their experience with headaches can reliably rule out a bleeding stroke from brain aneurysm.

“Most of these misdiagnosed patients, especially the younger ones, are probably people for whom stroke wasn’t really given much consideration or diagnostic assessment,” he says. “And this can have dire consequences.”

Researchers from the Agency for Healthcare Research and Quality (AHRQ), Blue Cross and Blue Shield of Minnesota and Truven Health Analytics contributed to the study, which was funded by AHRQ.