Enzyme Revealed as Promising Target to Treat Asthma and Cancer 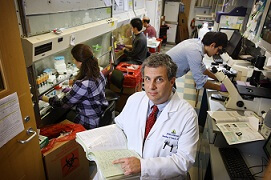 In experiments with mice, Johns Hopkins Kimmel Cancer Center scientists have identified an enzyme involved in the regulation of immune system T cells that could be a useful target in treating asthma and boosting the effects of certain cancer therapies.
In research described online April 6 in Nature Immunology, the investigators show that mice without the enzyme SGK1 were resistant to dust mite-induced asthma. And mice with melanoma and missing the enzyme, developed far fewer lung tumors—less than half as many—than mice with SGK1.
“If we can develop a drug that blocks the enzyme in a way that mimics what happens when the enzyme is missing, we would not only have a treatment to inhibit asthma, but also a drug that could be used in conjunction with other experimental therapies aimed at helping the immune system fight cancer,” said Jonathan D. Powell, M.D., professor of oncology at the Johns Hopkins Kimmel Cancer Center.
The unusual dual potential of an SGK1-blocking compound stems from the enzyme’s role in a key pathway linked to T cells, which act as either “generals” of the immune system by directing how the system works, or “soldiers” that seek and destroy foreign cells.
Powell and his colleagues decided to look at SGK1 because it works along the same pathway of a protein called mTOR, a focus of their previous research. The mTOR pathway helps T cells decipher signals from their environment, and prompts the cells to transform into specific T cell types.
As part of this pathway, SGK1 dials down production of a signaling protein called interferon-gamma. When SGK1 is inactive, T cells produce increased amounts of interferon-gamma that appear to be useful in fighting tumor cells.
Powell said that a SGK-blocking drug might be used in conjunction with other cancer immunotherapies as a sort of booster medication to enhance their effects. Experimental cancer immunotherapies, including vaccines and so-called checkpoint blockade inhibitors, are the focus of intense research within the past few years, he added.
The researchers also discovered that SGK1 promotes the production of T helper 2 cells, which become overactive in asthma and other allergies in a sort of runaway case of inflammation. Finding a drug that could shut down SGK1 could help block the inflammation that causes asthma and other allergic reactions.
By untangling the different effects of SGK1, Powell said, his team has advanced efforts to fine-tune immune responses in patients. “We’re not suppressing or exacerbating the immune system, we’re regulating it,” he noted. “We’re regulating it to do exactly what we want it to do.”
Other scientists involved in the study were Emily Heikamp, Chirag H. Patel, Sam Collins, Adam Waickman, Min-Hee Oh, Im-Hong Sun, Peter Illei and Maureen R. Horton from Johns Hopkins; Archna Sharma and Jyoti Sen from the National Institutes of Health; and Aniko Naray-Fejes-Toth and Geza Fejes-Toth from Dartmouth Medical School.
The work was supported by the National Institutes of Health (R01 AI77610, DK 41481, DK 58898); the American Asthma Foundation; the American Medical Association Seed Foundation Grant; and the Flight Attendant Medical Research Institute.
Return to Top