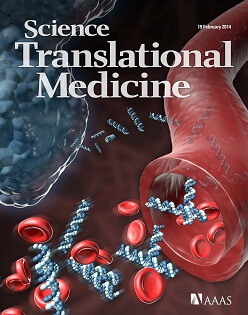 Reprinted with permission from AAAS.
Certain fragments of DNA shed by tumors into the bloodstream can potentially be used to non-invasively screen for early-stage cancers, monitor responses to treatment and help explain why some cancers are resistant to therapies, according to results of an international study led by Johns Hopkins Kimmel Cancer Center investigators.
Analyzing blood samples from 640 patients with various cancers, the researchers used digital polymerase chain reaction-based technology (a sophisticated method of multiplying and measuring the number DNA molecules) to evaluate how well the DNA fragments predicted the presence of tumors in the patients.
The fragments, known as cell-free circulating tumor DNA (ctDNA), were detected in the blood of more than 75 percent of patients with advanced cancers and in at least half of patients with localized, smaller tumors that had not spread outside of the organ where the cancer originated and still had the potential for cure.
Investigators say the work, published Feb. 19 in the journal Science Translational Medicine, provides strong evidence that ctDNA could be used as a "personalized biomarker" test and cancer screening tool.
"We're already very good at treating and curing cancer when it is localized," says lead study author Chetan Bettegowda, M.D., Ph.D., an assistant professor of oncology and neurological surgery. "But we wanted to develop a non-invasive technology to enhance detection of cancer at an early stage, and we feel this is an exciting starting point for further work using this method."
"The most promising aspect is that ctDNA can identify early-stage cancers," adds one of the study's senior authors, Luis Diaz, M.D., associate professor of oncology and director of the Swim Across America Laboratory at Johns Hopkins.
Among study participants with metastatic cancers, researchers detected ctDNA in 82 percent of patients with solid tumors outside the brain (112 of 136 patients), including more than 75 percent of patients with advanced ovarian, colorectal, bladder, gastroesophageal, pancreatic, breast, hepatocellular, and head and neck cancers, as well as melanomas. Fewer than 50 percent of patients with medulloblastomas or metastatic cancers of the kidney, prostate or thyroid, and less than 10 percent of patients with gliomas, had detectable ctDNA.
Among 223 patients with localized tumors, researchers detected ctDNA in 55 percent of all patient samples, and in 73 percent of those with colorectal cancer, 57 percent of those with gastroesophageal cancer, 48 percent of those with pancreatic cancer and 50 percent of those with breast adenocarcinoma. Increasing levels of ctDNA correlated with the stage of cancer: 47 percent of patients with Stage I cancers of any type had detectable ctDNA, as did 55 percent of patients with Stage II cancers, 69 percent of patients with Stage III cancers, and 82 percent of patients with Stage IV cancers.
Comparing ctDNA with circulating tumor cells (CTCs), intact cells shed from a primary tumor that circulate in the bloodstream and may lead to metastasis, researchers found that ctDNA was often present in patients without detectable CTCs. They did not identify any cases in which CTCs were detected and ctDNA was absent.
The researchers also studied how accurately the test identified mutations in patients' tumors. They analyzed tumors and blood samples in a separate group of 206 patients with metastatic colorectal cancers, finding that ctDNA correctly identified 87 percent of patients with KRAS gene mutations, meaning that these patients' tumors may be susceptible to a therapy called epidermal growth factor receptor (EGFR) blockade.
In addition, investigators assessed whether ctDNA could provide clues to how cancers build resistance to EGFR blockade therapy in 24 patients who responded to therapy initially but later relapsed. They found that 23 (96 percent) of patients developed one or more mutations in genes involved in a signaling pathway called MAPK, which regulates gene expression and cell survival, among other tasks, and may help cancer cells thrive.
The study "provides a wealth of information on the potential utility and limitations of ctDNA measurements to assess patients with various cancers," the study authors wrote.
Scientists involved in the study were from the Ludwig Center at Johns Hopkins and Boston University; the Institute for Cancer Research at Candiolo, the University of Torino, Italy; Life Technologies, Foster City, Calif.; Indiana University; the Ludwig Institute for Cancer Research at Royal Melbourne Hospital, Australia; the Children's Hospital of Philadelphia; Indivumed GmbH, Hamburg, Germany; the University of Sao Paulo, Brazil; Amgen Inc., Thousand Oaks, Calif.; Lund University Hospital, Sweden; the University of Colorado Comprehensive Cancer Center; Memorial Sloan-Kettering Cancer Center, New York; and the University of Texas Southwestern Medical Center.
The work was supported by The Lustgarten Foundation for Pancreatic Cancer Research; the Hilton Foundation; the Commonwealth Fund; Swim Across America; a Burroughs Wellcome Career Award for Medical Scientists; the Johns Hopkins Clinician Scientist Career Development Award; a Brain Science Institute Translational Research Grant; a Pediatric Brain Tumor Foundation Award; the Virginia and D.K. Ludwig Fund for Cancer Research; the National Institutes of Health; the European Community's Seventh Framework Programme; the Dr. Miriam and Sheldon G. Adelson Medical Research Foundation; the American Association for Cancer Research Stand Up to Cancer - Dream Team Translational Cancer Research Grant; the Ballanger Trust; a Clinical Innovator Award from the Flight Attendant Medical Research Institute Fund; the Victorian Cancer Agency; the Sao Paulo Research Foundation; the Michael Rolfe Foundation; Dennis Troper and Susan Wojcicki; the Sol Goldman Pancreatic Cancer Research Center; and AIRC IG grants.
Diaz and coauthors Kenneth W. Kinzler, Victor Velculescu, Bert Vogelstein and Nickolas Papadopoulos are co-founders of Personal Genome Diagnostics. They own stocks in Personal Genome Diagnostics and are members of their Scientific Advisory Board. Kinzler and Vogelstein are consultants to Inostics. Personal Genome Diagnostics and Inostics have licensed several patent applications from Johns Hopkins. These relationships are subject to certain restrictions under The Johns Hopkins University policy, and the terms of these arrangements are managed by the university in accordance with its conflict-of-interest policies.