But don’t put down the Chianti yet: As-yet-unknown compounds in such foods may still be conferring health benefits, researchers say
Release Date: May 12, 2014 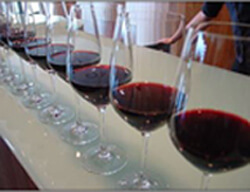 A study of Italians who consume a diet rich in resveratrol — the compound found in red wine, dark chocolate and berries — finds they live no longer than and are just as likely to develop cardiovascular disease or cancer as those who eat or drink smaller amounts of the antioxidant.

“The story of resveratrol turns out to be another case where you get a lot of hype about health benefits that doesn’t stand the test of time,” says Richard D. Semba, M.D., M.P.H., a professor of ophthalmology at the Johns Hopkins University School of Medicine and leader of the study described May 12 in JAMA Internal Medicine. “The thinking was that certain foods are good for you because they contain resveratrol. We didn’t find that at all.”

Despite the negative results, Semba says, studies have shown that consumption of red wine, dark chocolate and berries does reduce inflammation in some people and still appears to protect the heart. “It’s just that the benefits, if they are there, must come from other polyphenols or substances found in those foodstuffs,” he says. “These are complex foods, and all we really know from our study is that the benefits are probably not due to resveratrol.”

The new study did not include people taking resveratrol supplements, though few studies thus far have found benefits associated with them.

Semba is part of an international team of researchers that for 15 years has studied the effects of aging in a group of people who live in the Chianti region of Italy. For the current study, the researchers analyzed 24 hours of urine samples from 783 people over the age of 65 for metabolites of resveratrol. After accounting for such factors as age and gender, the people with the highest concentration of resveratrol metabolites were no less likely to have died of any cause than those with no resveratrol found in their urine. The concentration of resveratrol was not associated with inflammatory markers, cardiovascular disease or cancer rates.

Semba and his colleagues used advanced mass spectrometry to analyze the urine samples.

The so-called “French paradox,” in which a low incidence of coronary heart disease occurs in the presence of a high dietary intake of cholesterol and saturated fat in France, has been attributed to the regular consumption of resveratrol and other polyphenols found in red wine.

Kai Sun, M.S., a Johns Hopkins statistician, worked on the research. Researchers from the National Institutes of Health’s National Institute on Aging (NIA), the New England Research Institutes, the University of Barcelona in Spain, the Catalan Institute of Oncology in Spain, Azienda Sanitaria in Italy and the Instituto Nazionale di Ripose e Cura per Anziani V.E.II.-Instituto di Recovero e Cura a Carattere Scientifico in Italy also contributed to the study.

The work was supported by grants from the NIA (R01 AG027012), the National Institutes of Health’s National Heart, Lung and Blood Institute (R01 HL094507), the Italian Ministry of Health, the Spanish government and the NIA Intramural Research Program.