Deletion of Any Single Gene Provokes Mutations Elsewhere in the Genome 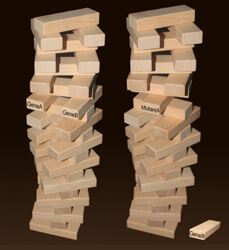 Deletion of Gene B causes instability in the genome that is compensated for through a secondary mutation in Gene A.
Xinchen Teng

Johns Hopkins researchers report that the deletion of any single gene in yeast cells puts pressure on the organism’s genome to compensate, leading to a mutation in another gene. Their discovery, which is likely applicable to human genetics because of the way DNA is conserved across species, could have significant consequences for the way genetic analysis is done in cancer and other areas of research, they say.

Summarized in a report to be published on Nov. 21 in the journal Molecular Cell, the team's results add new evidence that genomes, the sum total of species' genes, are like supremely intricate machines, in that the removal of a single, tiny part stresses the whole mechanism and might cause another part to warp elsewhere to fill in for the missing part.

"The deletion of any given gene usually results in one, or sometimes two, specific genes being 'warped' in response," says J. Marie Hardwick, Ph.D., the David Bodian Professor of Molecular Microbiology and Immunology at the Johns Hopkins Bloomberg School of Public Health and a professor of pharmacology and molecular sciences at the school of medicine. "Pairing the originally deleted gene with the gene that was secondarily mutated gave us a list of gene interactions that were largely unknown before."

Hardwick says the findings call researchers to greater scrutiny in their genetic analyses because they could unwittingly attribute a phenomenon to a gene they mutated, when it is actually due to a secondary mutation.

“This work has the potential to transform the field of cancer genetics,” Hardwick says. “We had been thinking of cancer as progressing from an initial mutation in a tumor-suppressor gene, followed by additional mutations that help the cancer thrive. Our work provides hard evidence that a single one of those ‘additional mutations’ might come first and actively provoke the mutations seen in tumor-suppressor genes. We hope that our findings in yeast will help to identify these ‘first’ mutations in tumors.”

The beauty of working with yeast, Hardwick says, is that it is easy to delete, or "knock out," any given gene. Her team started with a readily available collection of thousands of different yeast strains, each with a different gene knockout.

At their preferred temperature, each of these strains of yeast grows robustly even though they each have a different gene missing. Hardwick's team first asked a fundamental question: Within a given strain of yeast, does each cell have the same genetic sequence as the other cells, as had generally been presumed?

"We know, for example, that within a given tumor, different cells have different mutations or versions of a gene," explains Hardwick. "So it seemed plausible that other cell populations would exhibit a similar genetic diversity."

To test this idea, her team randomly chose 250 single-knockout strains from the thousands of strains in the collection. For each strain, they generated six sub-strains, each derived from a single yeast cell from the “parental batch.”

They then put each sub-strain through a "stress test” designed to detect sub-strains with behaviors that varied from the behavior of the parental batch. All of the sub-strains grew indistinguishably without stress, but when the temperature was gradually raised for only a few minutes, some sub-strains died because they could not handle the stress. When the Hardwick team examined their genes, they found that, in addition to the originally knocked-out gene, each of the sub-strains that faltered also had a mutation in another gene, leading the team to conclude that the cells in each strain of the single-gene knockouts do not all share the same genetic sequence.

They then tested all 5,000 of the original single-gene knockout strains to find sub-strains that could overgrow when given low-nutrient food — a trait that tumor cells often possess. This was another stress test designed to detect differences between the individual cells taken from the parental batches. They identified 749 such knockout strains and showed that their growth differences were often due to secondary mutations.

In total, the team’s evidence indicates that 77 percent of all the knockout strains have acquired one or two additional mutations that affect cell survival and/or excessive growth when food is scarce.

Hardwick believes that stressing yeast in other ways may lead to an even higher percentage of double-mutant strains. In fact, she said she believes that “essentially any gene, when mutated, has the power to alter other genes in the genome." Deleting the first gene seems to cause a biological imbalance that is sufficient to provoke additional adaptive genetic changes, she explains.

Scientists Identify DNA That May Contribute to Each Person's Uniqueness