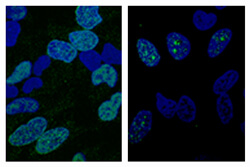 Most cells do not divide unless there is enough oxygen present to support their offspring, but certain cancer cells and other cell types circumvent this rule. Researchers at The Johns Hopkins University have now identified a mechanism that overrides the cells’ warning signals, enabling cancers to continue to divide even without a robust blood supply. In the process, the researchers found that lysosomes — the cell’s protein “recycling centers” — help govern cell division decisions. They also uncovered new evidence that certain drugs can halt the growth of tumors that have high levels of the protein HIF-1alpha.

A summary of their findings was published July 28 in the journal PNAS.

Low levels of oxygen stimulate the production and activation of HIF-1alpha, which protects cells in two ways. Primarily, it turns on several genes for proteins that help the cells adapt to the lack of oxygen. It can also stop the duplication of DNA, which prevents cells from dividing and adding more oxygen-using cells to an already harsh environment.

Knowing that some cells ignore the warnings of HIF-1alpha and divide anyway, Gregg Semenza, M.D., Ph.D., and his team looked for interactions between HIF-1alpha and Cdk1 and Cdk2, proteins known to regulate cell division decisions. They found that HIF-1alpha interacts with both of them, but that Cdk1 increases HIF-1alpha levels, while Cdk2 lowers them.

Remarkably, in certain cancer cells, Cdk2 was able to decrease levels of HIF-1alpha while also stimulating its gene activation activity. The net effect was that cells continued dividing while coping with low oxygen levels. In cultured cells, drugs that inhibit Cdk1 prevented HIF-1alpha levels from falling and restored its ability to halt cell division, suggesting they may be effective treatments for certain cancers.

This work was supported by grants from the National Cancer Institute (K99CA181352) and the American Cancer Society.

The photo accompanying this story is available for download.