Cells' 'Molecular Muscles' Help Them Sense and Respond to Their Environments 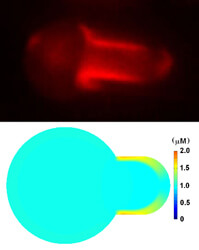 Top: When suction is applied to a cell, the protein filamin (red) accumulates along the sides of the cell's "neck." Bottom: A computer simulation accurately predicts filamin's accumulation.
Robinson Lab

Johns Hopkins researchers used suction to learn that individual “molecular muscles” within cells respond to different types of force, a finding that may explain how cells “feel” the environment and appropriately adapt their shapes and activities.

A summary of the discovery, published online Oct. 20 in the journal Nature Materials, specifically sheds light on how forces outside of cells are translated into internal signals.

A computer model the researchers developed, they add, also lets them predict what a cell will do in response to altered levels of those “muscles,” a common occurrence in a variety of cancers.

“We can now begin explaining what goes on in various diseases because we understand the fundamental mechanisms behind how cells experience different forces and respond to them,” says Douglas Robinson, Ph.D., professor of cell biology at the Johns Hopkins University School of Medicine.

“For the first time,” he adds, “we are able to explain what a cell can do through the individual workings of different proteins, and because all cells use information about the forces in their environments to direct decisions about migration, division and cell fate, this work has implications for a whole host of cellular disorders including cancer metastasis and neurodegeneration.”

Life as a cell, Robinson notes, is not so easy. For example, most cells are constantly pummeled by water molecules moving at speeds around 1,100 mph (almost 2,000 kph and roughly six times the speed of Category 5 hurricane winds). Red blood cells tumble through blood vessels and squeeze through tiny capillaries to bring oxygen to every part of the body. And bone cells feel the weight of an organism in a way that other cells don’t.

“Cells, like our bodies, have a sort of skin through which they sense their environments,” explains Robinson. “The hardness of their surroundings, various pressures, pushing and pulling, all of those forces are ‘felt’ by different proteins underneath the ‘skin’ of cells.”

How cells sense and react to these forces is poorly understood, he adds. The details are being filled in by their new computer model, developed with the help of Krithika Mohan and Pablo Iglesias from the Johns Hopkins University Whiting School of Engineering.

To develop it, the team worked with the proteins that feel the environment, part of a network that wraps around the inside edge of the cell, giving it shape and structure and inspiring the name “cytoskeleton.” The most prevalent among the proteins is actin, which forms short rods held together in a crisscross pattern by linker proteins. There are also anchoring proteins that attach the actin rods to the cell’s skin, or plasma membrane. Together, these components act as the “molecular muscles,” allowing the cell to change its shape when needed — for example, when it squeezes through small spaces to migrate to a different part of the body, or when it pinches itself in half to divide.

The team linked each of 37 cytoskeletal proteins to a fluorescent tag that marked its position in the cell. They then applied pressure to the cells, using a tiny glass tube to gently suck on the cells, deforming them and creating a “neck” as might occur if the hose of a vacuum cleaner sucked on a lightly inflated balloon.

As they recorded a protein’s movements under the microscope, they analyzed how each protein responded to the deformation of the cell: where each protein moved, how much of it moved and how quickly it got there.

There were two types of force in play during the experiments, says Tianzhi Luo, the primary author of the report. The tip of the neck experienced dilation: The overall shape was maintained while the area expanded. The elongated portion of the neck experienced shear: The area was maintained but the shape changed, like blocks of gelatin when they shake. What the team discovered were three different linker proteins that responded to these forces by moving into the neck. Unexpectedly, each moved to a different part of the neck in response to the different forces.

One of the linker proteins, myosin II, acts like a spring that can pull actin rods together, the team reports. It responded to dilation and moved in to generously cover the tip of the neck, to help counteract the stretch in that area.

Alpha-actinin, which reinforces the cytoskeleton by forming parallel bundles that stick to actin rods, also responded to dilation but limited its range to the very tip of the neck. Finally, filamin, which acts like a moveable hinge to connect actin rods in V-shaped angles, responded to the shear force and relocated just to the long part of the neck.

Armed with this information, the team created a computer simulation of all of the forces and “molecular muscles” involved. When they created genetic mutants that were missing one of the players, the cells behaved exactly as their model predicted.

This work was supported by grants from the National Institute of General Medical Sciences (GM066817, GM086704).

The Shape-Shifting Mechanics of Cells

Dividing Cells "Feel" Their Way Out of Warp