Cases of the Flu Have Been Reported in Maryland, But There Is Still Time to Get Vaccinated - 10/25/2017

Cases of the Flu Have Been Reported in Maryland, But There Is Still Time to Get Vaccinated

Johns Hopkins experts discuss why getting the flu vaccination is a good idea
Release Date: October 25, 2017 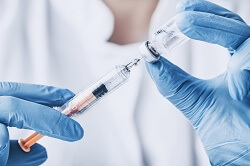 Maryland’s 2017-2018 flu season has officially begun with the first cases recently reported by the Maryland Department of Health. Johns Hopkins experts say getting the flu vaccine remains the best way to prevent the spread of the virus and decrease your chances of contracting it.

Influenza, often referred to as the flu, is a contagious respiratory illness caused by different strains of the influenza virus. “The circulating strains of the virus continually change, which is why the vaccine is annually updated, and it’s recommended for everyone 6 months of age and older to get the vaccine each flu season,” says Lisa Maragakis, M.D., M.P.H., senior director of infection prevention for the Johns Hopkins Health System and associate professor of medicine at the Johns Hopkins University School of Medicine. “Even if the vaccine isn’t a direct match to the circulating strains, it can limit the severity of the illness if you do contract the flu.” People who are allergic to components of the vaccine can consult their physician to find a vaccine formula suitable for them.

For this year, the recommended vaccine is an injectable version. This is the second year the nasal flu vaccine will not be offered to patients and employees at The Johns Hopkins Hospital, due to data that indicate it does not work as well as the injectable version.

In addition to the vaccine, there are other prevention methods that can help guard against the flu. “People should use good respiratory etiquette, especially during flu season. If you’re sick, cover your mouth, cough into your sleeve and wash your hands well,” says Aaron Milstone, M.D., associate hospital epidemiologist for The Johns Hopkins Hospital and associate professor of pediatrics at the Johns Hopkins University School of Medicine. “Recognize that people around you who are sneezing or coughing could be contagious. If you are unable to avoid them, encourage them to also adopt good respiratory etiquette.”

Flu season in the U.S. typically runs October through May, but generally peaks in colder months. Symptoms generally include coughing, runny nose, sore throat, headache, muscle or joint aches, and fatigue, though not everyone with the flu will display the exact same symptoms. The flu is easily spread and is generally passed from person to person through the air. The virus can also live on objects for short periods of time. The majority of people infected with the flu recover within three to five days, but flu complications are possible, most commonly pneumonia, bronchitis, and sinus and ear infections. Serious illness and death from the flu are more prevalent among young children, older adults and pregnant women. The flu can also worsen chronic health problems.

Although the symptoms can be somewhat similar, it is important to remember that the flu is different from a common cold. “Some people think that all kinds of head colds are the flu, but the flu is a specific disease that is caused by the influenza virus,” Maragakis says. Fevers associated with the flu typically come on more suddenly than those associated with a common cold. Cold symptoms are also typically more mild and usually do not result in the severe health problems that can occur with influenza. “It is important to contact your doctor if you believe that you are experiencing the flu because antiviral medications can shorten the duration and severity of illness,” Maragakis says.

A recent study raised concerns surrounding whether women in early stages of pregnancy should receive the flu vaccine. Maragakis says that Centers for Disease Control and Prevention recommendations still call for pregnant women to get the vaccine because they are at higher risk for severe illness from influenza. The reported data raising questions was from a single study, and the surprising finding did not provide enough evidence at this time for alarm. “Experts reviewed the available evidence and decided not to change the recommendations at this time,” Maragakis says. “Pregnant patients who are concerned should work with their providers to weigh the benefits and potential risks and decide on the best timing of flu vaccination for their situation.”

Please click here to view an interview with Maragakis and Milstone on the flu.