Cancers Evade Immunotherapy By 'Discarding the Evidence' of Tumor-Specific Mutations 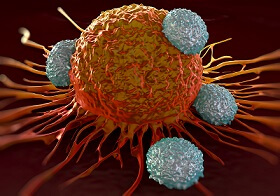 Results of an initial study of tumors from patients with lung cancer or head and neck cancer suggest that the widespread acquired resistance to immunotherapy drugs known as checkpoint inhibitors may be due to the elimination of certain genetic mutations needed to enable the immune system to recognize and attack malignant cells. The study, conducted by researchers on the cells of five of their patients treated at the Johns Hopkins Kimmel Cancer Center, is described online Dec. 28 in Cancer Discovery.

“Checkpoint inhibitors are one of the most exciting recent advances for cancers, but the mechanism by which most patients become resistant to these therapies has been a mystery,” says Victor E. Velculescu, M.D., Ph.D., program leader in the Bloomberg~Kimmel Institute for Cancer Immunotherapy at Johns Hopkins and professor of oncology. Clinical trials with the drugs to date have shown that nearly half of patients with lung cancers eventually develop resistance to this class of drugs for reasons that have been unclear.

Checkpoint inhibitors, such as nivolumab and ipilimumab, approved by the FDA for use against lung cancer, metastatic melanoma, head and neck cancer, and Hodgkin lymphoma, help the immune system recognize cancer cells by revealing evidence of mutated proteins called neoantigens on the surface of cancer cells.

To investigate why checkpoint inhibitors so often stop working, Velculescu; Valsamo Anagnostou, M.D., Ph.D., instructor of oncology at the Johns Hopkins University School of Medicine; Kellie N. Smith, Ph.D., a cancer immunology research associate at the Johns Hopkins University School of Medicine; and their colleagues at the Bloomberg~Kimmel Institute for Cancer Immunotherapy studied tumors of four patients with non-small cell lung cancer and one patient with head and neck cancer who developed resistance to two different checkpoint inhibitors: a drug called nivolumab that uses an antibody called anti-PD-1, or nivolumab used alone or in combination with a second drug called ipilimumab, which uses an antibody called anti-CTLA4.

Using biopsies of the patients’ tumors collected before the start of treatment and at the time patients developed resistance, the researchers performed large-scale genomic analyses to search for mutations specific to the cancer cells in all of each patient’s 20,000 genes.

The scientists’ genomic search narrowed in on genes that code for the production of antigens, which serve as a source of identification to the immune system. Cancer cells may contain mutations in genes that code for antigens, producing misshapen or otherwise altered antigens that are known to scientists as neoantigens. Such neoantigens are foreign to the immune system, and thus, the cancer cell is flagged for destruction, usually with the help of immunotherapy drugs.

The scientists found that after the patients developed resistance to immunotherapy, all of their tumors had shed between seven and 18 mutations in neoantigen-coding genes. By getting rid of those mutations, the tumor cells’ neoantigens look less foreign to the immune system and may go unrecognized, say the scientists.

“In some instances,” says Anagnostou, “we found that chromosomes in the cancer cells’ nuclei were missing an entire arm containing these mutated genes.”

To confirm that the missing mutations were important for generating an immune response, the researchers cultured a subset of the neoantigen protein fragments containing the tumor mutations with immune cells taken from three patients’ blood samples.  Between one and six of the eliminated neoantigens were shown to generate a specific immune cell response in each of the patients.

“Our findings offer evidence about how cancer cells evolve during immunotherapy,” Velculescu says. “When the cancer cells shed these mutations, they discard the evidence that would normally lead them to be recognized by the body’s protective immune cells.”

Velculescu, Anagnostou, Smith and their colleagues say they plan to determine how broadly this phenomenon occurs in other cancer types and potentially use it to develop new ways to improve current cancer immunotherapies. For example, they say, the mutated neoantigens present in tumor cells before therapy could give clues as to which patients’ tumors might develop resistance. The findings could also advance the development of new checkpoint inhibitors less likely to trigger resistance or personalized immunotherapy approaches.

Four checkpoint inhibitors are currently approved by the FDA —nivolumab, pembrolizumab, atezolizumab and ipilimumab — to treat melanoma, lymphoma, bladder, lung and head and neck cancers. The drugs cost more than $10,000 per month, an expense that has fueled efforts to improve their value and patient selection.

The study was funded by the National Institutes of Health’s National Cancer Institute (CA121113, CA006973, CA180950), the Commonwealth Foundation, the Dr. Miriam and Sheldon G. Adelson Medical Research Foundation, the Eastern Cooperative Oncology Group- American College of Radiology Imaging Network, the LUNGevity Foundation, and Stand Up To Cancer (SU2C)-Dutch Cancer Society International Translational Cancer Research Dream Team Grant and SU2C Immunology Dream Team. Stand Up To Cancer is a program of the Entertainment Industry Foundation and is administered by the American Association for Cancer Research.

Velculescu is a founder and member of the Scientific Advisory Board and Board of Directors of Personal Genome Diagnostics. He owns Personal Genome Diagnostics stock, which is subject to certain restrictions under Johns Hopkins University policy. Velculescu is a member of the Scientific Advisory Board of Ignyta. Pardoll receives research grants from Bristol-Myers Squibb and Potenza Therapeutics; is a consultant for Amgen, Five Prime Therapeutics, GlaxoSmithKline, Jounce Therapeutics, 25 MedImmune, Merck, Pfizer, Potenza Therapeutics, Sanofi and Tizona; owns Jounce, Potenza and Tizona stock; and holds patent royalties through The Johns Hopkins University from AstraZeneca, Bristol-Myers Squibb and Potenza. Forde receives research funding for clinical trials from Bristol-Myers Squibb, AstraZeneca, Kyowa and Novartis, and is a consultant/advisory board member (uncompensated) for Boehringer Ingelheim, Celgene, EMD-Serono and AstraZeneca. Brahmer receives commercial research grants from and is a consultant/advisory board member for AstraZeneca, Bristol-Myers Squibb and Merck.