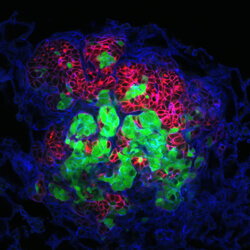 A metastasis now growing in lung tissue (blue) that originated from at least two cells (red and green) from a multicolored tumor in the mammary gland of a mouse.
Courtesy of Breanna Moore, Cheung laboratory, Fred Hutchinson Cancer Research Center

There’s apparently safety in numbers, even for cancer cells. New research in mice suggests that cancer cells rarely form metastatic tumors on their own, preferring to travel in groups since collaboration seems to increase their collective chances of survival, according to researchers at Johns Hopkins.

In a report on the study, published online the week of Feb. 1 in the Proceedings of the National Academy of Sciences, the investigators say they also found evidence that traveling cells differ from those multiplying within a primary tumor, and that difference may make them naturally resistant to chemotherapy.

“We found that cancer cells do two things to increase their chances of forming a new metastasis,” says Andrew Ewald, Ph.D., associate professor of cell biology at the Johns Hopkins University School of Medicine and a member of the Johns Hopkins Kimmel Cancer Center. “They turn on a molecular program that helps them travel through a diverse set of environments within the body, and they travel in groups.”

According to Ewald, conventional wisdom holds that cancer cells leave tumors one by one to colonize other areas of the body, but clinical and genetic evidence has mounted over the last 10 years to suggest otherwise. He and his team set out to settle the question using mice with a form of mammary gland cancer, which consistently metastasizes to the lungs, making it a favored research tool.

In their first experiments, Ewald and his team removed tumors from mice whose cells were genetically engineered to glow either red or green under special lights. They then implanted those red and green tumors in the mammary glands of mice whose cells did not glow and looked for metastases in the lungs.

If single cells colonized new metastases, the cell clumps would only ever glow one color or the other. Instead, the researchers found many multicolored clumps and, using computer modeling of this pattern, discovered that most of the single-colored clumps had also arisen from multiple cells that happened to glow the same color. In all, they estimate that less than 3 percent of the metastases came from a single cell.

To catch sight of the cell clumps before they reached their destination in the lungs, the researchers looked for them in the tissue just outside the primary tumors, in the blood vessels surrounding the tumors and in circulating blood. At each step, they found multicolored clusters of cells.

Next, to figure out if group travel gave the cells an advantage, the team compared the ability of single cells and clusters to form colonies. They began with two test groups with equal numbers of cells in dishes filled with a gelatinlike commercial product that mimics the tissue surrounding mammary tumors. They found that clusters were more than 15 times better at forming colonies than single tumor cells and, when they repeated the test in mice, the clusters were more than 100 times better at creating large metastases.

“You can think of metastasis as The Amazing Race,” says Ewald. “The cells encounter many different challenges as they attempt to grow and spread, and some cells are better at different events than others, so traveling in a group makes sense.”

Ewald says his team also looked at whether traveling cells showed any particular molecular hallmarks that could be used to predict and ultimately prevent tumor spread. Previous work in his laboratory showed that cells are usually “led” out of tumors by cells decorated with the protein K14, so they started there.

Indeed, he says, the team found that K14 levels are quite low in primary tumors and large metastases but high in small, traveling clusters of cells. Experiments in petri dishes showed that the cells switched between two molecular programs — one for proliferation and one for metastasis — and that the level of K14 revealed which program was “on” in any given cell.

“Because most chemotherapeutic drugs target proliferating cells, metastasizing cells won’t be killed by them, leaving patients vulnerable to new tumors,” explains Ewald. “Our discoveries add to knowledge that could help overcome that vulnerability.”

The team, he adds, was able to use K14 to separate the two types of cells and compare their gene activity. “We found that the activity of dozens of genes differs between proliferating and metastasizing cells,” says Ewald. “Since many of those genes encode cell surface proteins, we hope these findings might eventually be used to develop new drugs that target metastasizing cells.”