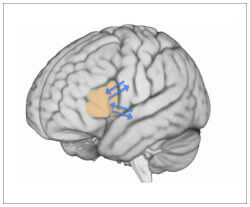 New research shows that Broca’s area, located in the frontal cortex and shown here in color, plans the process of speech by interacting with the temporal cortex, where sensory information is processed, and the motor cortex, which controls movements of the mouth.
Credit: Adeen Flinker, NYU

What is happening in the brain of an actor reciting Hamlet’s “to be or not to be” soliloquy or of the person next to you at lunch saying, “Please pass the salt”? For 150 years, scientists have known that a brain region called Broca’s area plays a key role in speech production, but exactly what it does and how it does it have been a mystery. Now, a study conducted at the Johns Hopkins University School of Medicine using recordings from the surface of the brain — made between surgical procedures to treat epileptic seizures — reveals that Broca’s area is active early in the process of forming sentences and ends its work before a word is actually spoken, which is sooner than was previously believed.

If the process of speaking is like a production of Shakespeare’s Hamlet, researchers once suspected that Broca’s area might be a detail-oriented director, controlling exactly how an actor pronounces each line. But the research, published Feb. 17 in the Proceedings of the National Academy of Sciences, suggests Broca’s area may be writing the script — organizing the string of sounds that express the playwright’s ideas.

This new insight about Broca’s area, which is located in the frontal cortex above and behind the left eye, could ultimately benefit the treatment of language impairments due to stroke, epilepsy and brain injuries, says Nathan E. Crone, M.D., an associate professor of neurology at Johns Hopkins and the senior author of the study. Crone is one of the pioneers of the technique the researchers used, which captures the timing and location of brain activity in sharp detail.

“We were interested in studying how information flows through the brain during speech,” Crone says, “and in this study, for the first time, we were able to record very precisely the timing of activation of different centers of the brain during different language tasks. Broca’s area has always been viewed as very important for the articulation of speech, but until now its precise role was unclear. We found that rather than carrying out the articulation of speech, Broca’s area is developing a plan for articulation, and then monitoring what is said to correct errors and make adjustments in the flow of speech. ”

Crone and his co-authors worked with seven patients with epilepsy receiving treatment for seizures at The Johns Hopkins Hospital. The experiment was conducted while patients were undergoing brain mapping to pinpoint the exact spot where each patient’s seizures were originating. In this process, doctors placed electrodes at several locations on the surface of the cortex, including Broca’s area, and recorded the electrical activity taking place in each location. Because the signals were picked up right on the cortex, they were free from problems that can affect recordings made on the scalp.

Patients are alert and interact with the medical team during this intracranial mapping. During pauses in the mapping, an experimenter asked each patient to read or listen to a one-syllable word and repeat it out loud. The test included real words, such as “book,” and nonsense words, such as “yode.” Broca’s area was most active just before the words were spoken, but its activity declined while the patients were speaking, the researchers found. The recording showed that Broca’s area was most active, and stayed active longest, when the patients were asked to pronounce nonsense words — a sign that Broca’s area had to work harder to process these unfamiliar sounds.

Broca’s area appears to act as an intermediary between the temporal cortex, which organizes incoming sensory information, and the motor cortex, which carries out the movements of the mouth, the researchers found. “Broca’s area shuts down during the actual delivery of speech, but it may remain active during conversation as part of planning future words and full sentences,” says lead author Adeen Flinker, now a postdoctoral researcher at New York University who did the research while he was a Ph.D. student at the University of California, Berkeley.

Flinker says neuroscientists have traditionally organized the brain’s language center into two main regions: one for perceiving speech, and one for producing speech. “This new finding helps us move toward a less dichotomous view, where Broca’s area is not simply a center for speech production but rather a critical area for integrating and coordinating information across brain regions.”

Other co-authors are Anna Korzeniewska and Piotr Franaszczuk of Johns Hopkins; Robert Knight and Avgusta Shestyuk of the University of California, Berkeley; and Nina Dronkers at the Veterans Affairs Northern California Health Care System. The research was funded by the National Institute of Neurological Disorders and Stroke and the Nielsen Corporation.