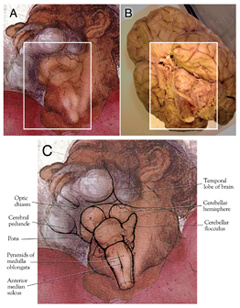 The odd depiction of God's neck in "Separation of Light From Darkness" (A) bears a striking resemblance to a brainstem, seen in tissue from a cadaver (B) and outlined in the painting (C). Image courtesy of Neurosurgery.

Michelangelo, the 16th century master painter and accomplished anatomist, appears to have hidden an image of the brainstem and spinal cord in a depiction of God in the Sistine Chapel’s ceiling, a new study by Johns Hopkins researchers reports. These findings by a neurosurgeon and a medical illustrator, published in the May Neurosurgery, may explain long controversial and unusual features of one of the frescoes’ figures.

Michelangelo is known to have dissected numerous cadavers starting in his teenage years, these anatomic studies aiding him in creating extremely accurate depictions of the human figure in his sculptures and paintings, notably the statue of David in Florence and paintings of God and other figures from the Book of Genesis in the Vatican’s Sistine Chapel in Rome.

Although the vast majority of subjects in this painting are considered anatomically correct, art historians and scholars have long debated the meaning of some anatomical peculiarities seen on God’s neck in the part of the painting known as Separation of Light From Darkness. In this image, the neck appears lumpy, and God’s beard awkwardly curls upward around his jaw.

“Michelangelo definitely knew how to depict necks—he knew anatomy so well,” says Rafael Tamargo, M.D., a professor in the Department of Neurosurgery at the Johns Hopkins University School of Medicine. “That’s why it was such a mystery why this particular neck looked so odd.”

To investigate, Tamargo enlisted the help of his Hopkins colleague Ian Suk, B.Sc., B.M.C., a medical illustrator and associate professor in the Department of Neurosurgery. Together, the researchers realized that the unusual features in the neck strongly resemble a brainstem, the portion of tissue at the base of the brain that connects to the spinal cord.

“It’s an unusual view of the brainstem, from the bottom up. Most people wouldn’t recognize it unless they had extensively studied neuroanatomy,” says Suk.

Suk adds that the strategically placed brainstem might also explain another unusual feature of the painting. In this same image, God is depicted in a red robe with an odd tubular structure depicted in the chest. Although God wears the same red robe in other images in the fresco, this tubular structure is absent elsewhere. The structure has the right placement, shape, and size to be a spinal cord, say the researchers, suggesting another piece of hidden anatomy in the artwork.

Tamargo and Suk explain that, if their proposition is correct, it wouldn’t be the first time that such concealed anatomical depictions have been proposed to exist in the Sistine Chapel’s ceiling. In 1990, Frank Lynn Meshberger, an obstetrician based in Indiana, published a paper suggesting that the shroud surrounding the image known as the Creation of Adam strongly resembles an anatomically correct brain.

“It looks like the central nervous system may have been too good a motif to use only once,” Tamargo says.

The two researchers plan to continue searching for other hidden pieces of anatomy elsewhere in the Sistine Chapel painting.

For more information, go to: