Brain's Stem Cells "Eavesdrop" to Find Out When to Act 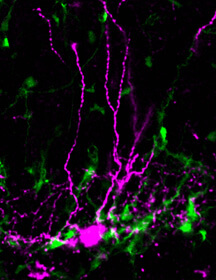 Working with mice, Johns Hopkins researchers say they have figured out how stem cells found in a part of the brain responsible for learning, memory and mood regulation decide to remain dormant or create new brain cells. Apparently, the stem cells “listen in” on the chemical communication among nearby neurons to get an idea about what is stressing the system and when they need to act.

The researchers say understanding this process of chemical signaling may shed light on how the brain reacts to its environment and how current antidepressants work, because in animals these drugs have been shown to increase the number of brain cells. The findings are reported July 29 in the advance online publication of Nature.

“What we learned is that brain stem cells don’t communicate in the official way that neurons do, through synapses or by directly signaling each other,” says Hongjun Song, Ph.D., professor of neurology and director of Johns Hopkins Medicine’s Institute for Cell Engineering’s Stem Cell Program. “Synapses, like cell phones, allow nerve cells to talk with each other. Stem cells don’t have synapses, but our experiments show they indirectly hear the neurons talking to each other; it’s like listening to someone near you talking on a phone.”

The “indirect talk” that the stem cells detect is comprised of chemical messaging fueled by the output of neurotransmitters that leak from neuronal synapses, the structures at the ends of brain cells that facilitate communication. These neurotransmitters, released from one neuron and detected by a another one, trigger receiving neurons to change their electrical charges, which either causes the neuron to fire off an electrical pulse propagating communication or to settle down, squelching further messages.

Next, the team treated normal mice with valium, often used as an anti-anxiety drug and known to act like GABA by activating GABA receptors when it comes in contact with them. The scientists checked the mice on the second and seventh day of valium use and counted the number of brain stem cells in untreated mice and mice treated with the GABA activator. They found the treated mice had many more dormant stem cells than the untreated mice.

“Traditionally GABA tells neurons to shut down and not continue to propagate a message to other neurons,” says Song. “In this case the neurotransmitter also shuts off the stem cells and keeps them dormant.”

The brain stem cell population in mice (and other mammals, including humans) is surrounded by as many as 10 different kinds of intermingled neurons, says Song, and any number of these may be keeping stem cells dormant. To find out which neurons control the stem cells, the researchers inserted special light-activating proteins into the neurons that trigger the cells to send an electrical pulse, as well as to release neurotransmitter, when light shines on them. By shining light to activate a specific type of neuron and monitoring the stem cells with an electrode, Song’s team showed that one of the three types of neurons tested transmitted a signal to the stem cells causing a change in electrical charge in the stem cells. The neurons messaging the stem cells are parvalbumin-expressing interneurons.

“GABA communication clearly conveys information about what brain cells experience of the outside world, and, in this case, keeps the brain stem cells in reserve, so if we don’t need them, we don’t use them up,” says Song.

Related Stories:
Nervous System Stem Cells Can Replace Themselves, Give Rise to Variety of Cell Types, Even Amplify