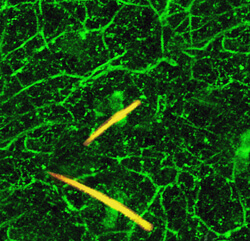 1 2
Nerves in mouse skin that are actively responding to the painful stimulus capsaicin have been genetically engineered to glow green. Hairs appear in yellow.
David Rini

Setting the stage for possible advances in pain treatment, researchers at The Johns Hopkins University and the University of Maryland report they have pinpointed two molecules involved in perpetuating chronic pain in mice. The molecules, they say, also appear to have a role in the phenomenon that causes uninjured areas of the body to be more sensitive to pain when an area nearby has been hurt. A summary of the research will be published on Jan. 23 in the journal Neuron.

"With the identification of these molecules, we have some additional targets that we can try to block to decrease chronic pain," says Xinzhong Dong, Ph.D., associate professor of neuroscience at the Johns Hopkins University School of Medicine and an early career scientist at Howard Hughes Medical Institute. "We found that persistent pain doesn't always originate in the brain, as some had believed, which is important information for designing less addictive drugs to fight it."

Chronic pain that persists for weeks, months or years after an underlying injury or condition is resolved afflicts an estimated 20 to 25 percent of the population worldwide and about 116 million people in the U.S., costing Americans a total of $600 billion in medical interventions and lost productivity. It can be caused by everything from nerve injuries and osteoarthritis to cancer and stress.

In their new research, the scientists focused on a system of pain-sensing nerves within the faces of mice, known collectively as the trigeminal nerve. The trigeminal nerve is a large bundle of tens of thousands of nerve cells. Each cell is a long “wire” with a hub at its center; the hubs are grouped together into a larger hub. On one side of this hub, three smaller bundles of wires — V1, V2 and V3 — branch off. Each bundle contains individual pain-sensing wires that split off to cover a specific territory of the face. Signals are sent through the wires to the hubs of the cells and then travel to the spinal cord through a separate set of bundles. From the spinal cord, the signals are relayed to the brain, which interprets them as pain.

When the researchers pinched the V2 branch of the trigeminal nerve for a prolonged period of time, they found that the V2 and V3 territories were extra sensitive to additional pain. This spreading of pain to uninjured areas is typical of those experiencing chronic pain, but it can also be experienced during acute injuries, as when a thumb is hit with a hammer and the whole hand throbs with pain.

To overcome the difficulty of monitoring nerve responses, Dong’s team inserted a gene into the DNA of mice so that the primary sensory nerve cells would glow green when activated. The pain-sensing nerves of the face are a subset of these.

When skin patches were then bathed in a dose of capsaicin — the active ingredient in hot peppers — the pain-sensing nerves lit up in both regions of the ear. But the V3 nerves in the lower ear were much brighter than those of the upper ear. The researchers concluded that pinching the connected-but-separate V2 branch of the trigeminal nerve had somehow sensitized the V3 nerves to “overreact” to the same amount of stimulus. (Watch nerves light up in this video.)

Applying capsaicin again to different areas, the researchers found that more nerve branches coming from a pinched V2 nerve lit up than those coming from an uninjured one. This suggests that nerves that don’t normally respond to pain can modify themselves during prolonged injury, adding to the pain signals being sent to the brain.

Knowing from previous studies that the protein TRPV1 is needed to activate pain-sensing nerve cells, the researchers next looked at its activity in the trigeminal nerve. They showed it was hyperactive in injured V2 nerve branches and in uninjured V3 branches, as well as in the branches that extended beyond the hub of the trigeminal nerve cell and into the spinal cord.

Next, University of Maryland experts in the neurological signaling molecule serotonin, aware that serotonin is involved in chronic pain, investigated its role in the TRPV1 activation study. The team, led by Feng Wei, M.D., Ph.D., blocked the production of serotonin, which is released from the brain stem into the spinal cord, and found that TRPV1 hyperactivity nearly disappeared.

Says Dong: “Chronic pain seems to cause serotonin to be released by the brain into the spinal cord. There, it acts on the trigeminal nerve at large, making TRPV1 hyperactive throughout its branches, even causing some non-pain-sensing nerve cells to start responding to pain. Hyperactive TRPV1 causes the nerves to fire more frequently, sending additional pain signals to the brain.”

Caterina is an inventor on a patent on the use of products related to TRPV1, which is licensed through the University of California, San Francisco and through Merck, and may be entitled to royalties related to these products. He is a member of the Scientific Advisory Board for Hydra Biosciences, which develops products related to TRP channels. These conflicts are being managed by The Johns Hopkins University in accordance with its conflict of interest policies.

On the Web:
Link to Neuron article

VIDEO of nerve cells lighting up when activated

Related stories:
Q&A with Dong on the molecules behind the itch

Ouch! Making Sense Out of Sensation