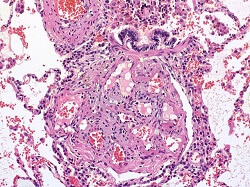 Johns Hopkins Medicine researchers report that rising blood levels of a protein called hematoma derived growth factor (HDGF) are linked to the increasing severity of pulmonary arterial hypertension, a form of damaging high blood pressure in the lungs. Their findings, described online June 2 in American Journal of Respiratory and Critical Care Medicine, could, they say, eventually lead to a more specific, noninvasive test for pulmonary arterial hypertension that could help doctors decide the best treatment for the disease.

“This has the potential to be a much more specific readout for the health of the lungs than what we currently measure using invasive cardiac catheterization,” says senior study author Allen Everett, M.D., professor of pediatrics and director of the Pediatric Proteome Center at the Johns Hopkins University School of Medicine. “It could really have value in making decisions about when to escalate therapy and when to ease it because at present, it’s difficult to determine whether someone’s disease is getting better or worse, especially in children.”

High blood pressure in the arteries that lead from the heart to the lungs is distinct from the most common forms of high blood pressure and can be difficult to diagnose, with shortness of breath frequently being the first or only symptom. Pulmonary hypertension is more common in women. Unlike many other forms of high blood pressure, the cause of pulmonary arterial hypertension isn’t always clear, but it can be genetic and/or associated with HIV and other infections, congenital heart disease, connective tissue disorders and living at high altitude. It often appears in otherwise healthy young people.

While there’s no cure for pulmonary arterial hypertension — which is estimated to affect 200,000 Americans — there are an increasing number of drugs available to help relax the arteries in the lungs, and lung transplants are a last-resort therapy.

Hoping to change the uncertainty surrounding diagnosis and therapy, Everett and his colleagues developed a new test to measure levels of HDGF in blood, which, Everett says, is a growth factor protein important for the formation of new blood vessels in the lung — a process known to readily occur in the lungs of patients with pulmonary hypertension. His research group compared blood samples from 39 patients with severe pulmonary arterial hypertension who had failed treatment for pulmonary arterial hypertension and were waiting for lung transplants, and a control group of 39 age, gender and race-matched healthy volunteers. They found median protein levels were about seven times higher than in controls, with a median of 1.93 nanograms per milliliter in patients and a median of 0.29 nanograms per milliliter in the controls.

When the team followed up the new observation with blood tests of HDGF levels in an additional 73 patients over five years, the results were dramatic, Everett says. Patients with an HDGF level greater than 0.7 nanograms per milliliter had more extensive heart failure and walked shorter distances in a six-minute walking test. HDGF was also lower in survivors than nonsurvivors (0.2 nanograms per millilieter versus 1.4 nanograms per milliliter), with elevated levels associated with a 4.5-fold increased risk of death even after adjusting for age, pulmonary hypertension type, heart function and levels of a protein that in the blood that predicts heart failure. These findings, Everett says, suggest that HDGF has a distinct advantage to current clinical measures for predicting survival in patients with pulmonary hypertension. This kind of “dose response” information is critical to demonstrate in preliminary, proof-of-principle research, he says.

Cautioning that the new findings need further examination and confirmation, Everett nevertheless says his team’s early results already point toward the value of using levels of HDGF in diagnosing and tracking pulmonary arterial hypertension in adults. “This could be a cheap and easy way to say: ‘Oh, good, your levels are going down. Let’s try to take away one of your medicines and see how that works,’” he explains. “Or if you know from the very beginning of their treatment that someone isn’t responding to any medicines, you can get them on the list for a lung transplant much sooner.”

Drug treatment is designed to thin the blood, relax arterial walls, and dilate or open up blood vessels. People with pulmonary arterial hypertension also can benefit from oxygen therapy and surgery to reduce pressure on the right side of the heart. Treatments are complicated and carry numerous serious side effects, Everett says, so finding measures that allow clinicians to minimize drug therapy will reduce side effects and cost.

In addition to Everett, the study’s authors are Jun Yang, Melanie Nies, Zongming Fu, Rachel Damico, Frederick Korley and Paul Hassoun of The Johns Hopkins University; Ivy Dunbar of the University of Colorado; and Eric Austin of Vanderbilt University.