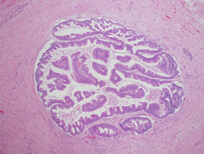 Johns Hopkins scientists have developed a gene-based test to distinguish harmless from precancerous pancreatic cysts.  The test may eventually help some patients avoid needless surgery to remove the harmless variety. A report on the development is published in the July 20 issue of Science Translational Medicine.

The investigators estimate that fluid-filled cysts are identified in more than a million patients each year, most of whom have undergone CT or MRI scans to evaluate non-specific symptoms, such as abdominal pain and swelling.

Bert Vogelstein, M.D., co-director of the Ludwig Center at Johns Hopkins and a Howard Hughes Medical Institute investigator, and his colleagues analyzed precancerous cysts from 19 patients and searched for mutations in 169 cancer-causing genes. They found mutations in the KRAS gene, well-known for its prevalence in pancreatic cancers, and the GNAS gene, which had not previously been associated with pancreatic cancer. In both KRAS and GNAS, the mutations occur at a single coding spot in the DNA, the equivalent of a typo in a word within an entire encyclopedia. KRAS and GNAS genes produce signaling proteins, relaying signals from the cell surface to areas within the cell.

Finally, the investigators tested tissue from pancreatic cancers that had developed in eight people with GNAS-mutated cysts. Seven of the eight had GNAS mutations in their cancer, as well as cells in the cysts.

GNAS and KRAS mutations were not found in benign cysts, although KRAS mutations did appear occasionally in a rare type of cyst with a relatively low potential to become cancerous.  These rare, mostly benign cysts are less challenging to diagnose because of their location within the pancreas and type of patient, according to the investigators.

"There has long been a need for accurate, quantitative ways to identify cysts that are more worrisome and to help patients avoid unnecessary surgeries for harmless cysts," says Vogelstein, the Clayton Professor of Oncology at the Johns Hopkins Kimmel Cancer Center.

"Most cysts are benign," says pathologist Ralph Hruban, M.D., director of Johns Hopkins' Sol Goldman Pancreatic Cancer Research Center, "but distinguishing between the harmless and dangerous ones is challenging for doctors and patients alike."

Generally, patients with a cyst that appears harmless and is less than 3 cm in size are monitored to watch for growth of the cyst or other concerning features such as a solid nodule. With cysts that appear more worrisome, surgical removal is often recommended, but the procedure requires removal of a portion of the pancreas as well, and complications like a pancreatic fistula (fluid from the pancreas leaks through the surgical incision), eating difficulties and prolonged recovery can develop, according to Christopher Wolfgang, M.D., Ph.D., associate professor of surgery, pathology and oncology and director of pancreatic surgery at Johns Hopkins.

Genetic analysis of the kind reported in the new study offers a new way to sort the potential of these cysts to cause malignant trouble.

The investigators caution that cyst fluid removal, an invasive procedure, also has its caveats and can cause bleeding, infection and inflammation in a very small percentage of patients.

Further studies on a larger number of patients must be done before the gene-based test can be widely offered. Vogelstein says, however, that the technology for developing a gene-based test in this case is relatively straightforward because "the mutation occurs at one spot in both of the genes."

Major funding for the study was provided by the Lustgarten Foundation, a private, nonprofit foundation dedicated to funding pancreatic cancer research. Other funding was provided by the Virginia and D.K. Ludwig Fund for Cancer Research, the Sol Goldman Center for Pancreatic Cancer Research, the Joseph L. Rabinowitz Fund, the Michael Rolfe Foundation, the Indiana Genomics Initiative of Indiana University, which is supported in part by Lilly Endowment Inc., the J.C. Monastra Foundation, Swim Across America and the National Institutes of Health.

Johns Hopkins University has filed a patent application on inventions described in the study mentioned in this news release.