New game immerses players in the ocean — and in a sea creature’s mind
Release Date: October 7, 2014 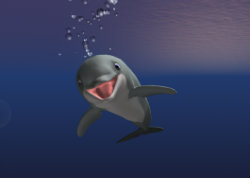 A multidisciplinary team at Johns Hopkins has used the principles of neuroscience to hijack our sense of what is and isn’t real. The result is a deceptively simple yet uniquely immersive video game, I Am Dolphin, slated for release on iTunes on Oct. 9. Users can choose between playing a dolphin, an orca whale or a Commerson’s dolphin. The game centers on sparring with a variety of predatory fish and sharks, each possessing sophisticated artificial intelligence. But the real reward is viscerally feeling the creature’s graceful movements.

I Am Dolphin is the product of a collaboration among software architects Omar Ahmad and Promit Roy, artist and Maryland Institute College of Art alumna Kat McNally, and neurology and neuroscience professor John Krakauer. Ahmad, Roy and McNally logged hundreds of weekend hours at Baltimore’s National Aquarium observing, filming and drawing the dolphins. Then, inspired by Krakauer’s motor control research and their own theories, they devised realistic simulations of sea creatures that can be controlled by swipes of a player’s hand across a touch screen.

“Our simulations have virtual muscles, bones and a functioning motor system that users can actually connect with via their own motor systems,” Ahmad explains. “You feel as though you become the dolphin.” Players get lost in the experience of virtually inhabiting another creature.

This connection, made possible by the fact that the creatures obey real-world physical laws, makes the game compelling in a way that others aren’t. Its creators hope that the empathy and respect it evokes will nudge players to support conservation efforts that protect dolphins and their cetacean kin. Krakauer also hopes these games will eventually help to understand the interaction between knowledge and motor skill. He plans to test whether using special assistive devices to play games like I Am Dolphin could one day aid motor recovery after strokes.

The team’s startup company, Max And Haley LLC, developed and will market the iPad, iPhone and iPod versions of the app.

Under a licensing agreement between Max And Haley LLC and The Johns Hopkins University, Krakauer, Ahmad and Roy are entitled to royalties on an invention described in this article. Additionally, Krakauer, Ahmad and Roy founded Max And Haley LLC and hold fiduciary roles in the company. This arrangement has been reviewed and approved by The Johns Hopkins University in accordance with its conflict of interest policies.

To receive a free advance copy of the game for review, please contact Taylor Graham or Lauren Nelson.

We are providing this photo/video with the understanding that it will be used only to help illustrate the story in the corresponding news release. Please use the caption and credit information provided. If there is anything else you need, please email us at JHMedia@jhmi.edu. Thank you.