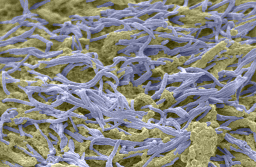 Researchers from Johns Hopkins have found that dense mats of interacting bacteria, called biofilms, were present in the majority of cancers and polyps, particularly those on the right side of the colon. The presence of these bacterial bunches, they say, may represent an increased risk for colon cancer and could form the basis of new diagnostic tests.
Like tooth plaque and slime on pond stones, bacterial biofilms may coat the mucus layer of cells lining the colon, causing inflammation and some noncancerous bowel diseases. The bacteria “invade the layer of mucus that protects epithelial cells in these areas and upend the whole biology of the system,” says Cynthia L. Sears, M.D., professor of medicine and oncology at the Johns Hopkins University School of Medicine and Bloomberg School of Public Health.
In an examination of healthy and cancerous tissue biopsied from 118 people undergoing surgery or colonoscopy at The Johns Hopkins Hospital or at the University of Malaya Medical Centre in Malaysia, Sears and her colleagues found that biofilms were present on 89 percent of tumors – 13 of 15 cancers and four of four polyps – removed from the right or ascending colon. By contrast, biofilms, for reasons not known, were found only 12 percent of the time on tumors on the left side of the colon – two of 15 cancers and no polyps.
Overall, the researchers say, their data suggest the risk of developing colorectal cancer might be fivefold higher in patients with biofilms on the right side of the colon, compared to patients without the bacterial mats. Results of their work were published online Dec. 8 in the Proceedings of the National Academy of Sciences.
“What was so striking was that these biofilm-positive samples cluster so dramatically in the right colon,” says Sears. “In fact, it’s virtually a universal feature of tumors that appear in that section of the colon, although we don’t understand why.”
Sears and her colleagues hope the new findings can be used to develop a noninvasive test that detects these biofilms and uses them to predict a person’s risk of developing cancer. Most colorectal cancers are known to develop slowly, over five to 10 years, “and it’s a disease that’s curable if you diagnose it early,” says Sears.
Colonoscopies currently are the gold standard in detecting colorectal cancer, but only approximately 60 percent of people in the United States get them. At the same time, colonoscopies are less frequently performed outside the United States, especially in low-resource countries, where colorectal cancers are on the rise, Sears says. “We have an obligation to find better ways to diagnose this, because colonoscopies will not be done routinely in other parts of the world, and we need better tools to help prevent disease.”
The research team also noted that probiotic treatments might be one strategy to reduce biofilms, but there is as yet no evidence that their use will reduce cancer risk or should be recommended to the public. Sears and her team speculate that biofilms induce inflammation, which in turn spurs genetic mutations in epithelial cells that make them prone to becoming cancerous. In the study, the scientists found a link between the presence of biofilms and biological changes associated with increased cell growth in the biopsied tissues.
The researchers also identified the types of bacteria found in the colon tissues through genetic sequencing. They found that the same species of bacteria were present in tumors from people with and without biofilms. This suggests that the biofilm itself, rather than a particular kind of bacteria, may be the cancer-causing trigger, adds Sears, a member of the Johns Hopkins Kimmel Cancer Center.
Sears’ earlier research looked at the role of bacteria and diarrheal disease, “but over time we recognized that our bacteria triggered changes in cells that were consistent with the ability to induce tumors,” she says. “And we wondered whether colonization with these organisms might be a long-term trigger for colon cancer.”
The researchers plan to examine biofilms in subjects over at least five years, Sears says, “to see if we can understand the dynamics of their formation, persistence and relationship to early cancer development.”
Other scientists who contributed to the research include Christine M. Dejea, Elizabeth C. Wick, Elizabeth M. Hechenbleikner, James R. White, Mark Lazarev, Ellen Stein, Jane W. Wanyiri, XinQun Wu, Shaoguang Wu, Drew M. Pardoll, Kai Fu, Fengyi Wan, Nicolas Llosa, Franck Housseau, Katharine Romans, Florencia M. McAllister, Bert Vogelstein and Kenneth W. Kinzler of Johns Hopkins; Jessica L. Mark Welch, Blair J. Rossetti and Gary G. Borisy at the Marine Biological Laboratory in Massachusetts; Scott N. Peterson and Erik C. Snesrud at the J. Craig Venter Institute; and Jamuna Vadivelu, Iyadorai Thevambiga, April C. Roslani, Ausama A. Malik and Khean L. Goh at the University of Malaya.
Funding for the study was provided by the National Institutes of Health (R01 CA151393, R21 CA170492, K08 DK087856, 5T32CA126607-05, P30 DK089502 (GI Core), P30 CA006973, U54 CA091409, T32AI007417, R01 DE022586), the Alexander and Margaret Stewart Trust, the American Society of Colon and Rectal Surgeons, and the Merieux Institute.