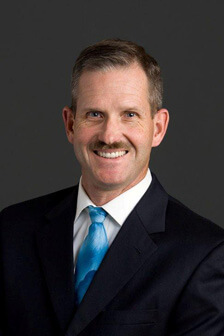 U.S. Army Col. James R. Ficke, M.D., a nationally renowned expert on the treatment of complex foot and ankle injuries and amputees, has been named the new director of the Department of Orthopaedic Surgery at The Johns Hopkins University School of Medicine, and orthopaedist-in-chief of The Johns Hopkins Hospital. Ficke will take on his new role as the director of the department later this month.

A 1983 West Point graduate, Ficke, 52, is currently the chairman of the Department of Orthopaedics and Rehabilitation at the San Antonio Military Medical Center at Fort Sam Houston in Texas. He also served the U.S. Army Surgeon General as the senior advisor on policy and personnel for orthopaedics and extremity injuries for 7 years, Part of his responsibility was development of systems designed to foster exceptional outcomes and physical performance for wounded Warriors and their families across the country.

Leading Army Orthopaedics and providing strategic direction for the six residencies across the nation, Ficke has helped train a substantial number of the Army’s current orthopaedic professionals.

The search committee was particularly impressed with Colonel Ficke’s ability to establish teamwork, camaraderie and collaboration with other disciplines. “We are delighted that Dr. Ficke will be bringing all of his exceptional skills to Johns Hopkins when he joins our ranks later this year.,“ says Paul B. Rothman, M.D., dean of the medical faculty and CEO of Johns Hopkins Medicine.

Ficke succeeds Charles W. Cummings, M.D., interim head of the department since 2011.  Cummings will continue to serve as interim director until Ficke’s arrival.

In addition to the awards he has received for his skills as a surgeon, educator, and military leader, he also has received some two dozen military decorations and awards, including the Bronze Star and Meritorious Service Medals.  During Ficke’s deployment as deputy commander of clinical services at the 228th Combat Support Hospital in Mosul, Iraq, from 2004 to 2005, he was the senior orthopaedic surgeon, treating more than 600 U.S. soldiers and Iraqi patients for war injuries. His service there and elsewhere subsequently earned him the Society of Military Orthopaedic Surgeons’ prestigious 2010 COL Brian Allgood Memorial Leadership Award, as well as The Surgeon General's 2010 Major General Lewis Aspey Mologne Award for excellence in military academics, education and clinical care.

Edward F. McCarthy, M.D., professor of Pathology and Orthopaedic Surgery at The Johns Hopkins University School of Medicine and a member of the team that selected Ficke, calls him immensely personable, extremely fair and honest, and says he is “the kind of guy you’d follow into battle.”

Ficke received his medical degree from Uniformed Services University, completed a transitional internship at Madigan Army Medical Center in Tacoma, Wash., and finished his residency in orthopaedic surgery at Tripler Army Medical Center in Honolulu.  He has completed an AO fellowship in trauma in Munich Germany, and a foot and ankle fellowship with James Brodsky, M.D., in Dallas Texas. He also has served as the co-Chair of the Extremity War Injury Symposium sponsored by the American Academy of Orthopaedic Surgeons since 2005.