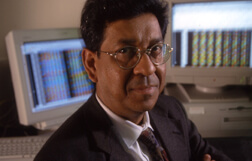 The American Society of Human Genetics (ASHG) has named the Johns Hopkins Institute of Genetic Medicine’s Aravinda Chakravarti, Ph.D., professor in the departments of Medicine, Pediatrics and Molecular Biology and Genetics and Department of Biostatistics at Johns Hopkins Bloomberg School of Public Health, as the 2013 recipient of the annual William Allan Award. The award, which recognizes Chakravarti’s many contributions to the field of human genetics, will be given on Oct. 25 during ASHG’s 63rd annual meeting in Boston. The ASHG’s top honor, it includes an engraved medal and cash prize.

“It’s great to see Aravinda’s impressive body of work recognized with this award,” said David Valle, M.D., Henry J. Knott Professor and Director of the McKusick-Nathans Institute of Genetic Medicine. “In winning the Allan Award, he follows in the footsteps of other pioneering geneticists at Johns Hopkins, including Barton Childs, Victor McKusick, Bert Vogelstein and Haig Kazazian.”

Chakravarti is known for developing several critical genomics methods that have been adopted by scientists worldwide; he also played a crucial role in the identification of the gene mutation associated with cystic fibrosis and discovered common variants associated with susceptibility to autism. In addition, he pioneered new methods to identify noncoding mutations responsible for the developmental disorder Hirschsprung disease. A member of the Institute of Medicine, Chakravarti chaired the third 5-year Human Genome Project plan from 1997 to 2000 as a member of the National Human Genome Research Institute’s advisory council. He later helped to design the 1000 Genomes Project population genetics sampling plan and played a crucial leadership role in the International HapMap Projects.