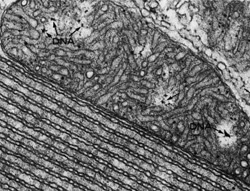 Mitochondrial DNA from the snake adrenal gland, where the mitochondrion is adjacent to a highly ordered array of endoplasmic reticulum (bottom left).
Image by John Long. Used with permission from 'The Cell, 2nd Ed.' by Don W. Fawcett, M.D. (Figure 227)

New research from The Johns Hopkins University suggests that the amount of mitochondrial DNA (mtDNA) found in peoples’ blood directly relates to how frail they are medically. This DNA may prove to be a useful predictor of overall risk of frailty and death from any cause 10 to 15 years before symptoms appear.

The investigators say their findings contribute to the scientific understanding of aging and may lead to a test that could help identify at-risk individuals whose physical fitness can be improved with drugs or lifestyle changes. A summary of the research was published online Dec. 4 in the Journal of Molecular Medicine.

“We don’t know enough yet to say whether the relationship is one of correlation or causation,” says Dan Arking, Ph.D., associate professor of genetic medicine. “But either way, mitochondrial DNA could be a very useful biomarker in the field of aging.”

Mitochondria are structures within cells often referred to as “power houses” because they generate most of cells’ energy. Unlike other cell structures, they contain their own DNA — separate from that enclosed in the nucleus — in the form of two to 10 small, circular chromosomes that code for 37 genes necessary for mitochondrial function. There are 10 to thousands of mitochondria per cell, depending on a cell’s energy needs.

After calculating how much mtDNA each sample contained relative to the amount of nuclear DNA, the team looked at measures of frailty and health status gathered on the studies’ participants over time.

“It makes intuitive sense that decreased mtDNA is associated with bad health outcomes,” says Arking. “, our energy reserves decrease, and we become more susceptible to all kinds of health problems and disease.”

The researchers also analyzed the age at which participants died. In one of the studies, high levels of mtDNA corresponded to a median of 2.1 extra years of life compared to those with the lowest levels of mtDNA.
Using data from both studies, the team found that those with mtDNA levels in the bottom one-fifth of the population were 47 percent more likely to die of any cause during the study period than were those in the top one-fifth. They also found that women had an average of 21 percent more mtDNA than men. According to Arking, this could play a small role in why women live two to four years longer than men on average.

Arking says that the research team would like to take repeated blood samples from individuals over several years to learn if and by how much mtDNA levels decrease over time. What the investigators saw in the current study is that, averaged over the population, an increase of 10 years in age corresponded to 2.5 percent less mtDNA.

The authors say they hope that mtDNA tests could detect people at risk of frailty 10 to 15 years before they begin to experience symptoms so that doctors can prescribe strength training or other interventions. If low numbers of mitochondria are shown to cause or contribute to frailty, the team can use their simple test on lab-grown cells to assess the effectiveness of new drugs to increase the numbers of mitochondria.