Algae in Your Throat? Scientists Discover Algae Virus in Humans 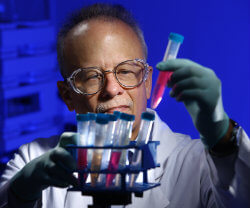 Scientists from Johns Hopkins and the University of Nebraska have discovered an algae virus never before seen in the throats of healthy people that may subtly alter a range of cognitive functions including visual processing and spatial orientation in those who harbor it. A report on the team’s findings is published online Oct. 27 in Proceedings of the National Academy of Science.

The discovery casts in a new light a class of viruses that has been thus far deemed non-infectious to humans, underscoring the ability of certain microorganisms to trigger delicate physiologic changes without causing full-blown disease, the researchers say.

“This is a striking example showing that the ‘innocuous’ microorganisms we carry can affect behavior and cognition,” says lead investigator Robert Yolken, M.D., a virologist and pediatric infectious disease specialist at the Johns Hopkins Children’s Center and director of the Stanley Neurovirology Laboratory at Johns Hopkins. “Many physiological differences between person A and person B are encoded in the set of genes each inherits from parents, yet some of these differences are fueled by the various microorganisms we harbor and the way they interact with our genes.”

People’s bodies are colonized by trillions of bacteria, viruses and fungi, a constellation of organisms whose functions are largely unknown and collectively make up the so-called human microbiome. Many are presumed harmless, while others, such as Lactobacillus acidophilus, are known to have clear benefits for human health. The findings of the new research suggest some may also affect human health in less obvious and not entirely benign ways.

In addition, the study provides a rare proof of a biologic phenomenon known as viral jumping, which typically occurs when viruses cross over from one species to another — think avian and swine flu — but is rarely seen across biologic kingdoms.

Yolken and colleagues stumbled upon the algae virus unexpectedly while analyzing the microbial population of the throats of healthy humans for a non-related study. Investigators obtained throat swabs and performed DNA analysis designed to detect the genetic footprints of viruses and bacteria. To their surprise, the researchers say, they discovered DNA matching that of Acanthocystis turfacea Chlorella virus 1, or ATCV-1, known to infect green algae. Green algae include more than 7,000 water-dwelling organisms that resemble plants but belong to a separate biologic kingdom. They are commonly found in aquatic environments like ponds, lakes and the ocean.

Forty of 92 participants in the study tested positive for the algae virus. The group that harbored the virus performed worse overall on a set of tasks to measure the speed and accuracy of visual processing. While their performance was not drastically poorer, it was measurably lower, the researchers say. For example, people who harbored the virus scored, on average, nearly nine points lower on a test that measured how quickly they could draw a line between sequentially numbered circles on a piece of paper. Viral carriers also scored seven points lower, on average, on tests measuring attention.

To further elucidate the effects of the virus, the investigators infected a group of mice and analyzed their performance on a set of tests designed to measure the rodent equivalent of human cognitive function. Animals infected with the virus exhibited deficits similar to those observed in humans. Infected animals had worse recognition memory and spatial orientation than uninfected mice. For example, they had a harder time finding their way around a maze, failing to recognize a new entry that was previously inaccessible. In addition, infected animals were less likely to pay attention to a new object, spending nearly 30 percent less time exploring it than uninfected mice, a finding that suggest shorter attention span and greater distractibility. The researchers caution that drawing direct links between mice and humans can be reductive but, they say, the parallels observed in the study were rather striking.

“The similarity of our findings in mice and humans underscores the common mechanisms that many microbes use to affect cognitive function in both animals and people,” says co-investigator Mikhail Pletnikov, M.D., Ph.D., director of the Behavioral Neurobiology and Neuroimmunology Laboratory at Johns Hopkins. “This commonality is precisely what allows us to study the pathologies that these microorganisms fuel and do so in a controlled systematic way.”

Analysis of brain samples from virus-infected mice revealed changes in the expression of multiple genes found in the hippocampus, the part of the brain that sorts and catalogues short-term and long-term memories and guides spatial orientation. Some of these alterations involved genes that regulate brain response to dopamine — a neurotransmitter affecting a wide range of neurologic and cognitive functions — as well as genes involved in immune cell regulation. The finding of multiple gene involvement suggests numeous mechanisms that may explain some of the effects observed in the study, the researchers say. The investigators, however, caution that their findings require in-depth follow-up to clarify the effects of the virus on human cognition and the exact mechanisms that precipitate them.

The new findings come on the heels of several recent studies showing that microbes can play an important role in the genesis of neurologic, cognitive and mental health disorders. For example, Yolken and others have previously shown that infection with the cat-borne parasite Toxoplasma gondii can alter behavior in genetically predisposed people — an illustrative example of the often synergistic role that genes and environment can play in human disease.

Faith Dickerson of Sheppard Pratt Health System in Baltimore was also a co-investigator.

The research was funded by the Stanley Medical Research Institute, the National Science Foundation and the National Center for Research Resources, part of the National Institutes of Health, under grant number P20-RR15635.