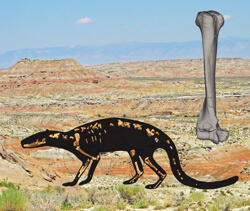 An artist’s rendition of the shape of Galecyon, with its fossilized bones laid out anatomically. Background, the Willwood Formation in the southern Bighorn Basin of Wyoming, where the bones were found. Right, the humerus (arm) bone of Galecyon.
Courtesy of the Journal of Vertebrate Paleontology

Prior to the rise of modern-day mammalian carnivores — lions and tigers and bears, as well as weasels, raccoons, wolves and other members of the order Carnivora — North America was dominated by a now-extinct group of mammalian carnivores — the hyaenodontids. While fossils of hyaenodontids are relatively common from the early Eocene Epoch — between 50 million and 55 million years ago — most of these are specimens of teeth. A new find of a nearly complete skeleton, described in the most recent issue of the Journal of Vertebrate Paleontology, has allowed for a more detailed study of the ecology and evolutionary relationships of these early carnivores.

The skeleton of the hyaenodontid Galecyon was found in an area of Wyoming well-known for fossils of this age. Lead author Shawn Zack of the University of Arizona says: “The skeleton of Galecyon shows why we keep looking for fossils even in places where we already have a lot of specimens. When this skeleton was found, tens of thousands of mammalian fossils had been collected from the Bighorn Basin, but this was the first decent skeleton of this animal.”

Galecyon was about the size of a small red fox, and the new find allowed the researchers, Zack and co-author Kenneth Rose of The Johns Hopkins University, to infer their locomotory abilities. “Comparing the skeleton to those of living carnivores indicates that Galecyon was neither a tree climber, like some of its contemporaneous relatives, nor a runner, like some later hyaenodontids,” says Rose. “Rather, it was most similar to generalized ground-dwelling animals, like skunks or wolverines.”

In addition to revealing something about the way this extinct animal lived, the fossil also allowed the researchers to investigate the ecological and evolutionary relationships among hyaenodontids. Since teeth are the most commonly found elements of the skeleton, this is normally done using dental characters, but the new specimen allows for the addition of characters in other parts of the skeleton.

“This study is a ‘tour de force’ in terms of the completeness of the description, imaging and analysis — a great example of how to combine systematics with functional morphology and phylogenetic reconstruction to produce a solid result and testable hypotheses for future work,” says Gregg Gunnell, a paleontologist from Duke University not involved with the study.

The photo that accompanies this story, and others, are available for download.