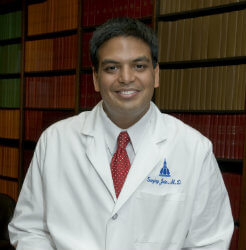 Combining a PET scanner with a new chemical tracer that selectively tags specific types of bacteria, Johns Hopkins researchers working with mice report they have devised a way to detect and monitor in real time infections with a class of dangerous Gram-negative bacteria. These increasingly drug-resistant bacteria are responsible for a range of diseases, including fatal pneumonias and various bloodstream or solid-organ infections acquired in and outside the hospital.

“What we have produced is essentially a system that localizes the epicenter of infection and provides real-time tracking of bacterial activity, giving us rapid feedback on how the bacteria respond to antibiotics,” says principal investigator Sanjay Jain, M.D., an infectious disease specialist at the Johns Hopkins Children’s Center and director of the Center for Inflammation Imaging and Research at Johns Hopkins.

Describing their work in the Oct. 22 issue of the journal Science Translational Medicine, the team says the simplicity, speed and accuracy of the imaging model could change the way dangerous bacterial infections are diagnosed, monitored and treated. Although the work was conducted in mice, the researchers say clinical application in humans could happen quickly, because the system capitalizes on already available imaging devices — PET scans — and materials.

“Our approach could quickly and reliably detect infections caused by certain Gram-negative organisms and could speed up diagnosis and treatment by eliminating days-long waits for lab test results,” says study co-author Edward Weinstein, M.D., Ph.D., an infectious disease specialist at the Johns Hopkins University School of Medicine. “Perhaps more importantly, the technique can give us critical insights into the basic mechanisms of disease and can help us evaluate the effect of drug therapy quickly.”

The new technique, the researchers say, is superior to current imaging tools because it selectively precision-targets a common class of Gram-negative bacteria known as Enterobacteriaceae that includes notoriously virulent germs such as E. coli, Salmonella, Klebsiella, and dozens of other pathogens that can be particularly dangerous in hospitalized people. Some of the germs in the class, the research team notes, could also be used as biological weapons.

Current imaging tools, such as CT, MRI and PET scans, use inflammation as a surrogate to diagnose and monitor infection, the researchers say. Yet inflammation, which is the body’s response to infection rather than infection itself, is not specific to bacteria and cannot distinguish true infections from non-infectious inflammation such as inflammation caused by cancer.

The new model emerged from a creative combination of existing PET scan technology — a sophisticated 3-D visualization system for tumor imaging — with an ingredient commonly used in sugar-free foods known as sorbitol. The model capitalizes on Gram-negative bacteria’s fondness for sorbitol, which they readily soak up. By contrast, other classes of bacteria and other microorganisms, cancer, and human cells do not absorb sorbitol. The researchers hypothesized that converting an already available PET imaging tracer into radio-labeled sorbitol would selectively tag and light up clusters of Gram-negative bacteria inside the body. It did.

When researchers injected mice with the Gram-negative bacterium E. coli in one thigh and harmless dead bacteria in the other thigh, both injections produced inflammation. However, only the cluster of live E. coli attracted the radio tracer and lit up the screen — a critical feature that let the researchers distinguish the actual bacterial infection from noninfectious inflammation. When the researchers injected one thigh with Gram-negative E. coli and the other thigh with the Gram-positive bacterium Staphyloccocus aureus, the radio tracer lit up only the thigh infected by the Gram-negative organism. In other words, the sorbitol-containing tracer differentiated between bacterial and sterile inflammation, as well as between infections caused by different classes of bacteria. Next, the researchers compared how their modified tracer fared in distinguishing brain inflammation caused by E. coli from cancer-induced brain inflammation. The tracer reliably and predictably lit up E. coli hot spots in the brain but not brain tumor cells.

When serious drug-resistant infections are suspected, the researchers explain, patients are routinely given broad-spectrum antibiotics while waiting — often for days — for lab tests to determine the specific organism responsible for the infection and which drugs should be used. Broad-spectrum antibiotics treat many bacteria at once, but their frequent and indiscriminate use has fueled drug resistance in recent years, making many pathogens impervious to common antibiotics.

“Using broad-spectrum antibiotics is not unlike firing a cannonball to kill a fly,” says study co-author Alvaro Ordonez, M.D., a fellow in pediatric infectious diseases at the Johns Hopkins University School of Medicine. “While such treatment is clinically justified in patients with serious infections of unknown origin, it promotes bacterial resistance, so the long-term price that both patients and clinicians pay is rather steep.”

Knowing quickly which organism is causing a patient’s infection and which antibiotic can kill the bacteria could seriously lower that cost, Ordonez adds. This is where the new imaging system could play a critical role.
In a separate set of experiments, the investigators showed that their imaging system rapidly captured how bacteria respond to drug treatment in real time. Targeted with the right antibiotic, the dying bacteria produced a visibly and progressively weaker image. By contrast, when bacteria failed to respond to an antibiotic, the strength of the signal remained as intense as ever, heralding treatment failure. Receiving such rapid feedback within hours instead of days could have profound effects on treatment decisions.

“Earlier identification of bacterial drug sensitivity could not only get patients on the mend sooner by giving them the right antibiotic, but in the long run it could save the U.S. health care system billions of dollars in unnecessary drug treatment,” Jain says.