A Match Made in Medical School

On Friday, March 18, medical students from Johns Hopkins and around the country will celebrate Match Day and find out where they will be training next year
Release Date: March 17, 2016 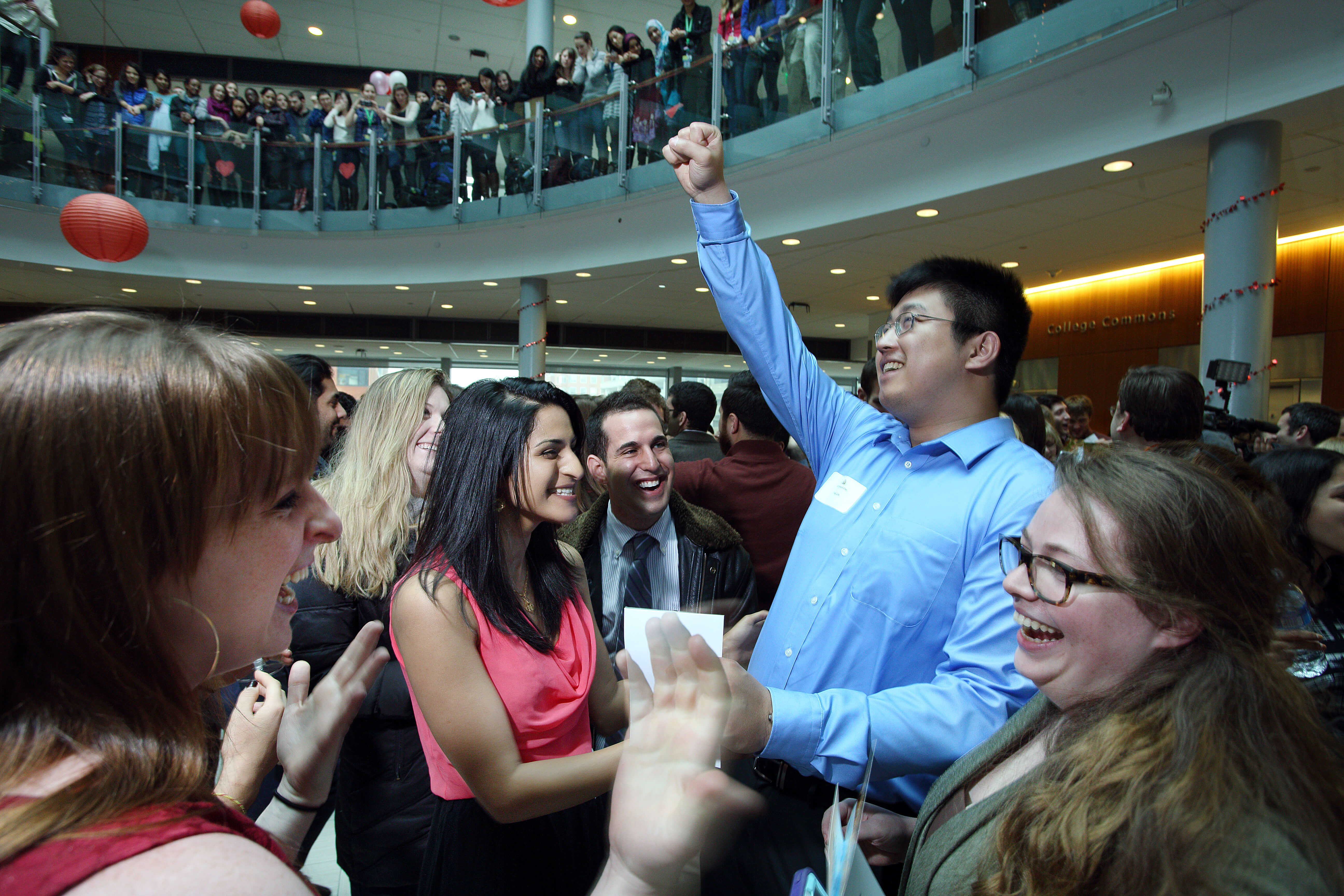 Students and families celebrate the moment they find out where each graduating medical student will be heading for residency.
Johns Hopkins Medicine/Keith Weller

The wait is almost over for students who will soon graduate from the Johns Hopkins University School of Medicine: At noon on Friday, March 18, they will open the envelopes that let them know where they will spend the next chapter of their lives training for careers in the medical field of their choosing.

The annual Match Day event is a rite of passage for graduating medical students, who will spend the next stage of their training in a three- to seven-year residency program, getting hands-on experience in a specific discipline.

Johns Hopkins’ annual Match Day celebration will take place on the second floor of the Anne and Mike Armstrong Medical Education Building at 1600 McElderry St. in Baltimore, Maryland. The students, along with family members, friends and mentors, will gather at 11 a.m. for a brief program leading up to the dramatic moment at noon, when students will learn which hospital and specialty program have accepted them for their residency. At that moment, students from medical schools around the United States will be doing the very same thing.

Prior to Match Day, students complete lengthy paperwork and on-site interviews with hospitals, then provide a ranked list of their top choices. Hospitals submit a similar list indicating openings, preferred students, and specialty or generalist preferences. Each applicant is matched via computer algorithm to the hospital residency program that is highest on the applicant’s list and has offered the applicant a position. Johns Hopkins students are often matched with their first- or second-choice sites.

Couples who are interested in going to the same city can have their applications linked. They will be matched based on the location they ranked highest and where each was offered a residency at a local hospital.

The National Resident Matching Program was started in 1952 with the goal of maximizing happiness by matching the top choices of both residency programs and medical students to ensure universal satisfaction. The program calls its method the “algorithm of happiness.”

Members of the media interested in covering the event should contact Lauren Nelson (laurennelson@jhmi.edu, 410-955-8725) or Taylor Graham (tgraha10@jhmi.edu, 443-287-8560) for information about parking, any other questions or to be put in contact with any of the students featured below.

When Harford County native Allie Miller picked her seat on the first day of her organic chemistry class at the University of Maryland, she did not expect to meet her future husband. Mason Dunham was the “tall guy who decided to sit in front of [her] … and [she] had to try to stare around his head all semester,” she recalls.

Four years later, Miller hopes to match in orthopaedic surgery and apply her skills and passion to help people heal.

Dunham, a medical student at the University of Maryland School of Medicine, is matching into anesthesiology. Dunham became interested in medicine in college. Originally an economics major, he felt himself being drawn more toward the sciences during his freshman year. He knew he wanted a career with more personal interaction than bench research, so he took an interest the medical field, and it stuck.

Miller and Dunham are taking part in the match as a couple to ensure that after their wedding in May, they can spend their residency near each other.

Maame Sampah’s interest in medicine arose from watching her own community in a small town within the capital of Ghana.

“I remember being very little and tagging along with my mother, who was a nurse, and members of her church during medical outreach activities for fishermen, their families and other members of the community,” she says. “I think, even then, I knew I was interested in working in medicine.”

Not long after she began her studies at the Johns Hopkins University School of Medicine, Sampah volunteered for Charm City Clinic, screening low-income, uninsured individuals from the East Baltimore community and providing resources to help them get the health care they need. She recalls learning about the needs of patients in disadvantaged communities surrounding the Johns Hopkins campus as a “truly eye-opening experience.” Sampah intends to combine clinical medicine with medical research to care for patients and to make a tangible difference in their lives.

Alan Utria’s fascination with surgery and anatomy began at age 6, after learning about a surgery to separate conjoined twins. He came to the United States from Zimbabwe to pursue an undergraduate education at Princeton University and later a medical degree at the Johns Hopkins University School of Medicine. In 2015, Utria did a rotation in India that underscored the differences in medical care between the U.S. and overseas. He took particular interests in the interactions between doctors and patients and the reuse of supplies. After considering a few surgical specialties, Utria decided on general surgery, where he hopes to have a career that combines both clinical and research components.

Sam Enumah studied neurobiology at Harvard College, where he met his fiancée, Rashmi Jasrasaria, a fourth-year medical student at Stanford University. Before starting medical school, he took a year off to travel to Peru and Rwanda. In Peru, he enjoyed sightseeing and building his Spanish skills. In Rwanda, he worked as an after-school science coordinator at Agahozo Shalom Youth Village, where he recalls learning more from his students than he could ever have taught them.

Enumah is looking to do a residency in general surgery. In addition to an active clinical career in surgery, Enumah is hoping to pursue research opportunities related to expanding access to surgical care for underserved populations in both domestic and international communities.