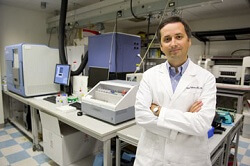 Scientists at the Johns Hopkins Kimmel Cancer Center have used data from the whole genome sequencing of cancer patients to develop individualized blood tests they believe can help physicians tailor patients' treatments. The genome-based blood tests, believed to be the first of their kind, may be used to monitor tumor levels after therapy and determine cancer recurrence.

"We believe this is the first application of newer generations of whole-genome sequencing that could be clinically useful for cancer patients," says Victor Velculescu, M.D., Ph.D., associate professor of oncology and co-director of the cancer biology program at Johns Hopkins. "Using this approach, we can develop biomarkers for potentially any cancer patient."

In a report on the work, published in the Feb. 24 issue of Science Translational Medicine, the scientists scanned patients' genomes for alterations that, they say, most researchers have not been looking for: rearrangements of large chunks of DNA rather than changes in a single DNA letter among billions of others. They call their new approach Personalized Analysis of Rearranged Ends (PARE).

"In sequencing individuals' genomes in the past, we focused on single-letter changes, but in this study, we looked for the swapping of entire sections of the tumor genome," says Bert Vogelstein, M.D., Clayton Professor of Oncology, co-director of the Ludwig Institute at Johns Hopkins, and investigator in the Howard Hughes Medical Institute. "These alterations, like the reordering of chapters of a book, are easier to identify and detect in the blood than single-letter changes."

Such DNA rearrangements are widely known to occur exclusively in cancer cells, not normal ones, making them ideal biomarkers for cancer.

Using six sets of cancerous and normal tissue samples taken from four colorectal and two breast cancer patients, the Johns Hopkins team used next-generation sequencing methods to catalogue the genome sequence data of each patient.  To find DNA rearrangements, the team first identified regions where the number of DNA copies was more or less than anticipated and where sections of different chromosomes fused together. These regions were further analyzed to identify DNA sequences displaying incorrect ordering, orientation, or spacing. A range of four to 15 rearrangements were found in each of the six samples.

After investigators identified DNA rearrangements in patients' tumor samples, they looked for the same changes in DNA shed from tumors into the patients' blood. Using blood samples from two of the colorectal cancer patients, they amplified DNA found in the blood and determined that these tests were sensitive enough to detect rearranged tumor DNA in these samples.

Results from such blood tests, they say, could help clinicians detect cancer or its recurrence and inform them on how a patient is responding to cancer therapies. In one colon cancer patient's example, the scientists found a section of chromosome four fused to a section of chromosome eight.  "We developed a biomarker that could span this rearrangement and used a blood test to evaluate biomarker levels as the patient received a variety of cancer therapies," says Rebecca Leary, a graduate student at the Johns Hopkins Kimmel Cancer Center.

The investigators envision that PARE-based biomarkers could also be used to determine whether cancer cells are present in surgical margins or lymph node tissue removed during surgery and possibly for diagnosing early disease. "Eventually, we believe this type of approach could be used to detect recurrent cancers before they are found by conventional imaging methods, like CT scans," says Luis Diaz, M.D., assistant professor of oncology at Johns Hopkins.

The technology used to examine the patients' genomes will become inexpensive, predicts Velculescu.  He says the genome scan cost them about $5,000 per patient, but that sequencing costs continue to drop.  CT scans currently cost $1,500 per scan and are limited in their ability to detect microscopic cancers.

"If current trends in genome sequencing continue, PARE will be more cost effective than CT scans and could prove to be more informative," says Kenneth W. Kinzler, Ph.D., professor of oncology and co-director of the Ludwig Center at Johns Hopkins.

The Johns Hopkins team plans on testing more patient samples and refining their techniques to produce a commercially viable genome-based blood test.  They have filed for patents on the technology.

Funding for the research was provided by the National Institutes of Health, The Lustgarten Foundation, the National Colorectal Cancer Research Alliance, and a UNCF-Merck Fellowship.