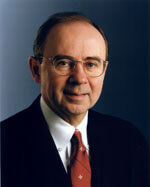 Patrick C. Walsh, M.D., University Distinguished Service Professor of Urology who served for 30 years as the director of the Johns Hopkins Brady Urological Institute, has been honored by the Saudi Arabian-based King Faisal Foundation for his pioneering work in the area of prostate cancer research.

Prince Khalid Al-Faisal, member of the Saudi royal family and director of the King Faisal Foundation, announced the winners of this year’s King Faisal International Prize at an awards ceremony in Riyadh on Jan. 16. Walsh, along with Fernand Labrie, a Canadian researcher, was selected as the prize recipient in the medicine category, which this year honored contributors in the field of prostate cancer research.

The monetary award ($200,000), which Walsh and Labrie will share, is given in five categories: service to Islam, Islamic studies, Arabic language and literature, medicine and science. Awardees also receive a 24-karat, 200-gram gold medal.

“It goes without saying that being selected for this award is an immense honor,” says Walsh. “I realize how much thought and care goes into their selection process, so to ultimately be chosen is indeed special.”

Walsh, a physician and researcher at Johns Hopkins for more than three decades, is widely known for his ground-breaking nerve-sparing prostatectomy and is credited with furthering the overall understanding of benign and malignant neoplasms of the prostate.

He is the author of several best-selling books and the winner of many distinguished awards honoring his contributions to prostate cancer research, including the Charles F. Kettering Gold Medal from the General Motors Cancer Research Foundation.

In its press release detailing the selection process, the King Faisal Foundation said, “Professor Walsh is renowned worldwide for developing nerve-sparing radical surgery for prostate cancer, thereby contributing substantially to improved survival and eliminating the possibility of impotence and incontinence.”

The King Faisal Foundation was established in 1976. Although the International Prize has been awarded since 1977, the medicine category was added in 1981.

Nominations for the prizes are accepted from international institutions and organizations only, and not from individuals or political parties, according to foundation literature.

The foundation’s organizers say the International Prize has gained respect from the global scientific community because of its stringent, multilayered, peer-reviewed selection process.

“Merit alone governs the rigorous selection procedures,” the King Faisal Foundation states on its Web site. “…(it has) the distinction of being among the most prestigious of international awards to scholars and scientists who have made the most significant advances to benefit humanity and enrich human knowledge.”

Walsh joins a group of 160 other awardees from 37 countries who have received the International Prize over the years.