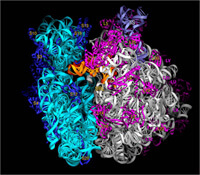 It depicts the ribosome, a perfectionist protein-maker, in all its majesty, and includes a textbook schematic of translation. Translation is what the ribosome does: it translates our genetic code to manufacture proteins which, as workhorses of the cell, carry out the business of life.
*click on the image for high resolution version

The enzyme machine that translates a cell’s DNA code into the proteins of life is nothing if not an editorial perfectionist.

Johns Hopkins researchers, reporting this week in Nature, have discovered a new “proofreading step” during which the suite of translational tools called the ribosome recognizes errors, just after making them, and definitively responds by hitting its version of a “delete” button.

It turns out, the Johns Hopkins researchers say, that the ribosome exerts far tighter quality control than anyone ever suspected over its precious protein products which, as workhorses of the cell, carry out the very business of life.

“What we now know is that in the event of miscoding, the ribosome cuts the bond and aborts the protein-in-progress, end of story,” says Rachel Green, a Howard Hughes Medical Institute investigator and professor of molecular biology and genetics in the Johns Hopkins University School of Medicine. “There’s no second chance.”

Previously, Green says, molecular biologists thought the ribosome tightly managed its actions only prior to the actual incorporation of the next building block by being super-selective about which chemical ingredients it allows to enter the process.

Because a protein’s chemical “shape” dictates its function, mistakes in translating assembly codes can be toxic to cells, resulting in the misfolding of proteins often associated with neurodegenerative conditions. Working with bacterial ribosomes, Green and her team watched them react to lab-induced chemical errors and were surprised to see that the protein-manufacturing process didn’t proceed as usual, getting past the error and continuing its “walk” along the DNA’s protein-encoding genetic messages.

“We thought that once the mistake was made, it would have just gone on to make the next bond and the next,” Green says. “But instead, we noticed that one mistake on the ribosomal assembly line begets another, and it’s this compounding of errors that leads to the partially finished protein being tossed into the cellular trash,” she adds.

To their further surprise, the ribosome lets go of error-laden proteins 10,000 times faster than it would normally release error-free proteins, a rate of destruction that Green says is “shocking” and reveals just how much of a stickler the ribosome is about high-fidelity protein synthesis.

“These are not subtle numbers,” she says, noting that there’s a clear biological cost for this ribosomal editing and jettisoning of errors, but a necessary expense.

“The cell is a wasteful system in that it makes something and then says, forget it, throw it out,” Green concedes. “But it’s evidently worth the waste to increase fidelity. There are places in life where fidelity matters.”

The research was funded by the National Institutes of Health with support from the Howard Hughes Medical Institute.

In addition to Rachel Green, Hani S. Zaher, also of Johns Hopkins, was author of the paper.

Related Stories:
Rachel Green contemplates her fascination with the ribosome

Argonautes: A Big Turn-Off For Proteins