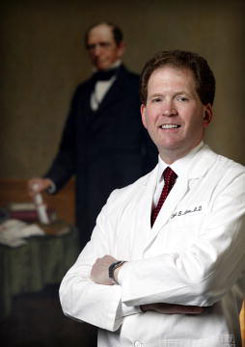 MAY 17, 2010- Lloyd Minor, M.D., an expert in balance and inner-ear disorders, and Johns Hopkins University’s provost and senior vice president of academic affairs, has been awarded the Prosper Ménière Society’s 2010 gold medal. The award is for Minor’s contributions to understanding the scientific basis of Ménière’s disease, named for the French scientist who pegged its hallmark symptoms of recurring dizziness and “constant ringing noise in the head,” or so-called tinnitus, to dysfunction in the inner ear.

A medal and commemorative plaque were presented to Minor, an otolaryngologist – head and neck surgeon, at a dinner ceremony in March in Austria at the Society’s biannual international symposium and workshop on inner ear medicine and surgery.

Minor, who served as the Andelot Professor and director of the Department of Otolaryngology-Head and Neck Surgery at Johns Hopkins’ School of Medicine from 2003 until his appointment as provost, published four key studies between 1999 and 2001, laying out the connection between head motion and eye movements and how they are controlled by the balancing mechanisms centered in the inner ear.

Most notably, colleagues say, his work advanced the diagnosis and treatment of balance disorders, including superior canal dehiscence, an often disabling form of severe dizziness. Minor perfected the condition’s diagnosis and refined a surgical procedure to repair a defect in the bone in the inner ear that restored balance and hearing function in hundreds of people.

“This is a great honor for Lloyd Minor, whose dedication to patients, teaching and mentoring the next generation of physicians, and to research in the fundamental aspects of disease bear true testament to the core mission of Johns Hopkins Medicine,” says Edward D. Miller, M.D., dean and CEO of Johns Hopkins Medicine. “Lloyd has proven what the famed scientist Louis Pasteur said, which was that ‘chance favors the prepared mind.’”

Miller notes that during Minor’s undergraduate studies, he learned how mathematics can be used to model biological pathways and expose the underlying processes, or pathology, of diseases, especially those of the nervous system. Minor later applied this knowledge to the functional anatomy of the inner ear, breaking down diseases such as Ménière’s into their complex but still decipherable components. And from this, we have improved how we treat people with balance disorders, whether through balance exercises, diet, drugs or surgery.

In addition to his leading roles at Johns Hopkins, Minor is a fellow of the American College of Surgeons and American Academy of Otolaryngology – Head and Neck Surgery, past president of the Association for Research in Otolaryngology and past chair of the Auditory Research Study Section of the National Institutes of Health. Minor earned both his undergraduate and medical degrees at Brown University. He completed his initial surgical residency training at Duke University, followed by a postdoctoral fellowship in vestibular physiology and residency in otolaryngology - head and neck surgery at the University of Chicago.

For additional information, please go to:

The Johns Hopkins Center for Hearing and Balance