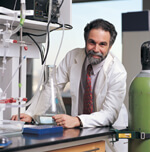 Gregg L. Semenza, M.D., Ph.D., a professor of pediatrics at The Johns Hopkins School of Medicine and Jane I. Guyer, Ph.D., a professor of anthropology at The Johns Hopkins University were elected as members of the National Academy of Sciences (NAS) for their excellence in original scientific research.  Membership in the NAS is one of the highest honors given to a scientist or engineer in the United States. Semenza and Guyer will be inducted into the Academy next April during its 146th annual meeting in Washington, D.C.

Semenza and Guyer, elected along with 70 others, brings the number of Johns Hopkins University faculty elected to NAS to 21.  There are currently just over 2,000 active NAS members.  Among the NAS's renowned members are Albert Einstein, Robert Oppenheimer, Thomas Edison, Orville Wright, and Alexander Graham Bell.  More than 180 living Academy members have won Nobel Prizes.

One of today’s pre-eminent researchers on the molecular mechanisms of oxygen regulation, Semenza has led the field in uncovering how cells adapt to changing oxygen levels. He has identified and studied the HIF-1 (hypoxia-inducible factor 1) protein, which controls genes in response to changes in oxygen availability. HIF-1 controls genes involved in adaptation to low oxygen—genes that control energy manufacture, generation of new red blood cells and the growth of new blood vessels. He currently is studying the role of HIF-1 in cancer, ischemia and chronic lung disease, the most common causes of mortality in the U.S. population.

Semenza received his M.D. and Ph.D. from the University of Pennsylvania, did his residency in pediatrics at Duke University Medical Center and postdoctoral research in medical genetics at Hopkins. On the faculty at Hopkins since 1990, he has authored more than 100 research articles, several book chapters and sits on the editorial boards of several scientific publications.  Semenza has received several awards, including the E. Mead Johnson Award for Research in Pediatrics, the Jean and Nicholas Leone Award, Children's Brain Tumor Foundation, the American Heart Association Established Investigator Award, the Lucille P. Markey Scholar Award in Biomedical Science and was recently elected to the Association of American Physicians. He is member of the McKusick-Nathans Institute of Genetic Medicine and director of the vascular biology program in the Hopkins Institute for Cell Engineering.

“Dr. Semenza’s ground-breaking discovery of the hypoxia inducible factor has started an entire new field of research and helped put Johns Hopkins on the academic map nationally and internationally.  His outstanding service to the Hopkins community—his involvement with multiple training programs, teaching several courses each year, and participation in several committees—is a draw for talented graduate students, fellows and faculty,” says Chi V. Dang, M.D., Ph.D., the vice-dean for research at Hopkins. “We are thrilled that his work has been recognized with this rare honor.”

Jane Guyer earned her doctoral degree in anthropology from the University of Rochester in N.Y., and received her bachelor's degree in sociology from the London School of Economics and Political Science. She joined the Johns Hopkins University faculty in 2002 as a professor in the Department of Anthropology, and added a secondary appointment in the Department of History in 2007. Before coming to Johns Hopkins, she spent seven years as director of the Program of African Studies at Northwestern University, and has also served on the faculties at Harvard University and Boston University. Guyer's research has focused on material life, with major emphasis on issues related to food, oil and money. Most recently, Guyer has been studying the China-India-Africa-Brazil axis of global trade in small consumer items, but she has devoted her entire career up to now to economic transformations in West Africa, particularly the productive economy, the division of labor and the management of money. Guyer's most recent book, Marginal Gains: Monetary Transactions in Atlantic Africa (2004) re-examines the anthropological and historical record on monetary transactions in Atlantic Africa. The author of numerous research articles and editor many collected works, Guyer also serves on several national and international committees, including the International Advisory Group to the World Bank and the governments of Chad and Cameroon on the Chad-Cameroon Petroleum Development and Pipeline Project and the Board of Directors of the African Studies Association.

The National Academy of Sciences is a private, nonprofit honorific society of distinguished scholars engaged in scientific and engineering research, dedicated to the furthering science and technology and to their use for the general welfare.  Established in 1863, the National Academy of Sciences has served to "investigate, examine, experiment, and report upon any subject of science or art" whenever called upon to do so by any department of the government.