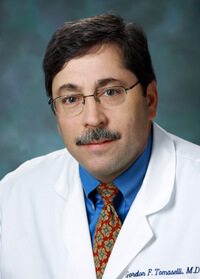 Gordon Tomaselli, M.D., an expert on sudden cardiac death and heart rhythm disturbances, has been named the new director of the Johns Hopkins University School of Medicine’s Division of Cardiology and co-director of the School’s Heart and Vascular Institute.

February 2, 2009- Physician-scientist Gordon Tomaselli, M.D., an expert on sudden cardiac death and heart rhythm disturbances, has been named the new director of the Johns Hopkins University School of Medicine’s Division of Cardiology and co-director of the School’s Heart and Vascular Institute.

Tomaselli, who has been at Johns Hopkins since 1986, succeeds Eduardo Marbán, M.D., Ph.D., who led the division since 2002 and will remain active as adjunct faculty. He also succeeds Marbán as the Michel Mirowski, M.D., Professor of Cardiology.

Tomaselli, 53, a cardiac electrophysiologist, has focused most of his research efforts on arrhythmias, and especially on new therapies aimed at warding off the potentially fatal heart condition. More than 300,000 Americans suddenly die each year when the heart suddenly stops pumping blood, triggered by an electrical disturbance in the heart.

In addition to his new roles, Tomaselli will continue as co-director of the Donald W. Reynolds Cardiovascular Clinical Research Center at Hopkins, funded in 2003 to carry out research into the causes of sudden cardiac death.

Specifically, Tomaselli and his team are testing better ways of predicting who benefits from implanted cardiac defibrillators (ICDs), which briefly shock the heart to correct errant heart rhythms. Though an estimated 2 million Americans, many of them elderly, have an ICD, no more than 20 percent of the devices ever need to fire a shock, and the goal is to be able to predict which patients can benefit most from the surgically invasive and costly procedure.
Early detection of arrhythmia using imaging and genetic screening, along with the use of stem cell technology to treat tissue damaged by heart attack or cardiac arrest, are also part of the research agenda expected under Tomaselli’s leadership.

“This is a tremendous appointment for Hopkins and for Dr. Tomaselli, who has already made his mark at Hopkins by establishing himself and the School of Medicine as a world leader in the study of causes and potential therapies to prevent sudden cardiac death,” says Myron Weisfeldt, M.D., physician in chief at The Johns Hopkins Hospital and a professor and director of the Department of Medicine at the School. “Gordon Tomaselli knows first hand how the Hopkins experience helped him to develop as a global leader in the field, and he is poised to build on these insights and his active involvement with the American Heart Association to inspire the next generation of physician scientists.”

The author of more than 150 articles and many book chapters on various aspects of arrhythmia, Tomaselli has investigated how so-called ion-channel proteins regulate the flow of electrically charged molecules into and out of heart muscle cells. His research has tied ion- channel disturbances to certain types of heart disease and shown that they can cause electrical instability in the body’s main pumping organ, creating rapid and often lethal arrhythmias, which can lead to cardiac arrest and sudden death.

For the last two years, Tomaselli served as program chair for the American Heart Association’s Scientific Sessions, the world’s premier conference for cardiologists. He is currently chairman of the association’s 2010-2013 Strategic Planning Task Force.

Tomaselli also remains an active member of the American College of Cardiology and serves on the board of directors of the Heart Rhythm Society.

As head of the Johns Hopkins’ Division of Cardiology, Tomaselli will lead a group of 713 people, including 102 faculty and 87 fellows, who treat more than 4,000 inpatients a year. He will also oversee an annual research budget of nearly $40 million, one of the largest at Hopkins, with major research initiatives under way in heart failure; cardiac imaging; regenerative medicine with stem cells; inherited, genetic heart disorders; and myocardial biology and heart cell signaling.

The division Tomaselli inherits has earned national and international acclaim, Weisfeldt says, and has been consistently ranked U.S. News & World Report among the top four in cardiology among American academic medical centers.

Tomaselli earned his undergraduate degree in biochemistry and chemistry in 1977 from the State University of New York at Buffalo and his medical degree in 1982 from Albert Einstein College of Medicine. He completed his medical training and residency at the University of California at San Francisco (UCSF) in 1985. Tomaselli began his career in the UCSF Cardiovascular Research Institute as a research fellow, before moving to the fellowship program at the Johns Hopkins School of Medicine in 1986 and joining the faculty three years later. Since then, he has received numerous awards and served on a variety of boards and committees. From 2003 to 2005, Tomaselli was president of the Cardiac Electrophysiology Society.