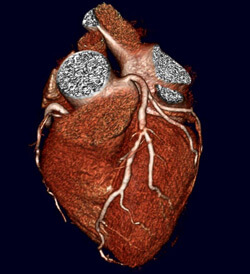 A study by an international team of cardiac imaging specialists, led by researchers at Johns Hopkins, concludes that sophisticated computed tomography (CT) scans of the heart and its surrounding arteries are almost as reliable and accurate as more invasive procedures to check for blockages.

Researchers say the newer, 64-slice CT scans, first introduced in the United States in 2005 and initially tested at Hopkins, won’t replace the need for inspecting arteries by cardiac catheterization, also known as coronary angiography, but the scans will help cardiologists more quickly rule out those who can skip the more invasive procedures.  Studies suggest that as much as 25 percent of the 1.3 million cardiac catheterizations performed each year in the United States may be unnecessary.

The latest study also showed that early detection with 64-CT is a good predictor of who will need angioplasty or coronary bypass surgery to open up new blood supply routes to the heart.

In the study, investigators selected 291 men and women over the age of 40 who were already scheduled to have cardiac catheterization to check for blocked arteries.  Each underwent a 64-CT scan prior to catheterization.  Participants were then monitored through regular check-ups to identify who developed or did not develop coronary artery disease and who required subsequent bypass surgery or did not need surgery.

After the first year of monitoring, to continue annually until 2009, researchers found that results from 64-CT scans matched up 90 percent of the time with results from invasive catheterization in detecting patients with blockages.

“This study is the first step to realizing the full potential of CT imaging in predicting coronary artery disease, and these scans complement the arsenal of diagnostic tests available to physicians to prevent heart attacks,” says cardiologist Julie Miller, M.D., who led the study at Hopkins.

The new study also suggests that the new scanners, four times quicker than the more widely used 16-CT, may be a good alternative to cardiac stress testing, which evaluates heart function by measuring the effects of hard exercising.  Exercise stress testing generally cannot safely be performed on the weak and elderly.

“Use of 64-CT scans will dramatically improve our ability to detect and treat people with suspected coronary disease and chest pain much earlier in their disease,” says cardiologist João Lima, M.D., senior investigator to the team whose findings will be presented Nov. 5 at the American Heart Association’s (AHA) annual Scientific Sessions in Orlando, Fla.  “Cardiac catheterization is still the gold standard for evaluating clogged arteries, but our results show that this test could easily be the best backup or alternative.”

In cardiac catheterization, a thin tube is threaded into a blood vessel in the groin area to the heart’s arteries, where a dye is released to produce a clear X-ray image of the beating heart and its arterial blood supply.  In CT imaging, computer-driven machinery passes X-rays through the body, producing digitized signals or “slices” that are detected and reconstructed for a precise picture.