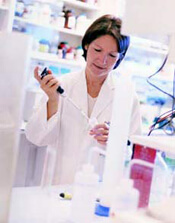 Johns Hopkins scientists have found that a safe and inexpensive antibiotic in use since the 1970s for treating acne effectively targets infected immune cells in which HIV, the virus that causes AIDS, lies dormant and prevents them from reactivating and replicating.

The drug, minocycline, likely will improve on the current treatment regimens of HIV-infected patients if used in combination with a standard drug cocktail known as HAART (Highly Active Antiretroviral Therapy), according to research published now online and appearing in print April 15 in The Journal of Infectious Diseases. “The powerful advantage to using minocycline is that the virus appears less able to develop drug resistance because minocycline targets cellular pathways not viral proteins,” says Janice Clements, Ph.D., Mary Wallace Stanton Professor of Faculty Affairs, vice dean for faculty, and professor of molecular and comparative pathobiology at the Johns Hopkins University School of Medicine.

“The big challenge clinicians deal with now in this country when treating HIV patients is keeping the virus locked in a dormant state,” Clements adds. “While HAART is really effective in keeping down active replication, minocycline is another arm of defense against the virus.”

Unlike the drugs used in HAART which target the virus, minocycline homes in on, and adjusts T cells, major immune system agents and targets of HIV infection. According to Clements, minocycline reduces the ability of T cells to activate and proliferate, both steps crucial to HIV production and progression toward full blown AIDS.

If taken daily for life, HAART usually can protect people from becoming ill, but it’s not a cure. The HIV virus is kept at a low level but isn’t ever entirely purged; it stays quietly hidden in some immune cells. If a person stops HAART or misses a dose, the virus can reactivate out of those immune cells and begin to spread.

The idea for using minocycline as an adjunct to HAART resulted when the Hopkins team learned of research by others on rheumatoid arthritis patients showing the anti-inflammatory effects of minocycline on T cells. The Hopkins group connected the dots between that study with previous research of their own showing that minocycline treatment had multiple beneficial effects in monkeys infected with SIV, the primate version of HIV. In monkeys treated with minocycline, the virus load in the cerebrospinal fluid, the viral RNA in the brain and the severity of central nervous system disease were significantly decreased. The drug was also shown to affect T cell activation and proliferation.

“Since minocycline reduced T cell activation, you might think it would have impaired the immune systems in the macaques, which are very similar to humans, but we didn’t see any deleterious effect,” says Gregory Szeto, a graduate student in the Department of Cellular and Molecular Medicine working in the Retrovirus Laboratory at Hopkins.

“This drug strikes a good balance and is ideal for HIV because it targets very specific aspects of immune activation.”

The success with the animal model prompted the team to study in test tubes whether minocycline treatment affected latency in human T cells infected with HIV. Using cells from HIV-infected humans on HAART, the team isolated the “resting” immune cells and treated half of them with minocycline. Then they counted how many virus particles were reactivated, finding completely undetectable levels in the treated cells versus detectable levels in the untreated cells.

“Minocycline reduces the capability of the virus to emerge from resting infected T cells,” Szeto explains. “It prevents the virus from escaping in the one in a million cells in which it lays dormant in a person on HAART, and since it prevents virus activation it should maintain the level of viral latency or even lower it. That’s the goal: Sustaining a latent non-infectious state.”

The team used molecular markers to discover that minocycline very selectively interrupts certain specific signaling pathways critical for T cell activation. However, the antibiotic doesn’t completely obliterate T cells or diminish their ability to respond to other infections or diseases, which is crucial for individuals with HIV.

“HIV requires T cell activation for efficient replication and reactivation of latent virus,” Clement says, “so our new understanding about minocyline’s effects on a T cell could help us to find even more drugs that target its signaling pathways.”

The research was supported by grants from the National Institutes of Health.
Authors of the paper, in addition to Clements and Szeto, are Angela K. Brice, Sheila A. Barber and Robert F. Siliciano, all of Johns Hopkins. Also, Hung-Chih Yang of National Taiwan University Hospital.

Janice E. Clements, Ph.D., on her teams discovery that a safe, inexpensive antibiotic will improve on the current treatment regimens of HIV-infected patients:

Rooting out reservoirs of HIV infection