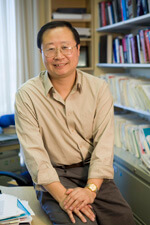 A Johns Hopkins scientist who proposes to design and create an all-new series of novel drugs is one of 17 winners of a special grant known as a Director’s Pioneer Award from the National Institutes of Health.

The award, to Jun O. Liu, Ph.D., a professor of pharmacology and molecular sciences and oncology in the Johns Hopkins University School of Medicine, carries $2.5 million in research support over five years.

As director of the Johns Hopkins Drug Library, which houses 3,000 of the estimated 10,000 drugs used in medical practice, Liu has specialized in finding new uses for often-forgotten drugs. Among the notable discoveries was that a known antifungal antibiotic, itraconazole, is a potent inhibitor of angiogenesis, or new blood vessel formation, implicated in cancer, macular degeneration and other diseases. Based on that finding, itraconazole has entered multiple Phase 2 clinical studies for treating cancer at the Johns Hopkins Sidney Kimmel Comprehensive Cancer Center and elsewhere.

Liu also found that an old antibiotic, clofazimine, used more than a century ago to treat leprosy, may be effective against autoimmune disorders like multiple sclerosis and psoriasis. Most recently, he screened 175,000 small chemical compounds and identified a class of them that potently and selectively slows down the activity of a protein vital to the growth of tuberculosis. The work showed that the protein is a vulnerable drug target for TB.

The Pioneer award will fund a different sort of research in Liu’s laboratory, studies that let him design and synthesize “cyclic combinatorial libraries,” a collection of small molecules that will serve as probes of protein function in cells as well as provide leads for the development of new medicines. The name of the collection refers to the cyclic shapes of the molecules to be made, which make more robust compounds than linear chains of atoms. “Combinatorial” refers to a method of creating very large numbers of chemicals by condensing a small number of chemically reactive molecules in all possible combinations. The collections of the compounds as groups are the “libraries.”

“Each compound in the combinatorial libraries will be embedded with a common structure that serves as a beacon to help track the compound during large-scale screening assays,” Liu says. “These libraries will be screened to identify compounds that bind and affect the activity of newly identified proteins in the human proteome.”

Once such compounds are found, they can be used to alter and study the functions of those proteins, according to Liu. If a target is involved in a disease process, the compound can become a new lead for drug development.

“Jun is one of the world leaders in using small molecules to dissect cellular mechanisms,” says Philip A. Cole, M.D., Ph.D., Marshall-Maren Professor and director of the Department of Pharmacology and Molecular Sciences at Johns Hopkins. “His outstanding track record and exceptional creativity make him extremely deserving of the NIH Pioneer Award.

Liu’s interdisciplinary approach to research spans the fields of chemistry, biology and translational medicine and involves a combination of tools and techniques from protein biochemistry and molecular and cell biology to synthetic organic chemistry. He was named a fellow in 2008 by the American Association for the Advancement of Science.

"NIH is pleased to be supporting scientists from across the country who are taking considered risks in a wide range of areas in order to accelerate research. We look forward to the results of their work,” says NIH Director Francis S. Collins, M.D., Ph.D.