IMMUNOTHERAPY IS ONE of the most promising new cancer treatments, as it can turn the power of the immune system— more powerful than any cancer drug —against cancer cells. In some cancers, like lung cancer and melanoma skin cancer, immunotherapy has been successful at treating even advanced cancers. Responses in breast cancer have been more limited, so it has been challenging to move forward with immunotherapy studies, but experts like Cesar Santa-Maria, M.D., M.S.C.I., are not giving up. He is exploring ways to make breast cancer an immunotherapy-responsive cancer, investigating drug combinations and identifying biomarkers that flag cancers most likely to respond. Two large national studies, Impassion130 and KEYNOTE 355, studied the benefit of combining chemotherapy with anti-PD-L1 and anti-PD-1 inhibitors in hundreds of patients with metastatic triple negative breast cancer. The PD-L1/PD-1 receptors are immune checkpoints, controlling an “on/off” switch of sorts that cancers often exploit to shut down the immune response to tumors. Drugs that block PD-L1 and PD-1 can unleash these restraints, causing immune cells to attack cancer. In both of these studies, Santa-Maria says they found that patients whose cancers expressed high levels of PD-L1 had improved, progression-free survival. “We eagerly await mature overall survival data, but these results suggest we may be heading in the right direction,” he says. Santa-Maria says the importance of biomarkers in selecting patients for treatment with immunotherapy is becoming clearer with research. Tumor mutational burden, or the quantity of genetic defects in the tumor, is one such promising biomarker, he says. Tumors with large numbers of genetic mutations stand out to the immune system because these alterations to DNA can result in abnormal, cancer-specific proteins that the immune system can recognize.

Only about 3% to 4% of breast cancers have high levels of mutations (classified as tumor mutational burden higher than 10 mutations per megabase), says Santa-Maria, and that’s why biomarkers are so important to guide the right patients — those likely to respond — to immunotherapy. “We are learning how to use these biomarkers and looking for new ones that point to who will benefit from immunotherapy and what combinations of drugs will work best,” he says. Santa-Maria and a group of clinical scientists are heading the Patient Response to Immunotherapy using Spliceosome Mutational Markers (PRISMM) study, which will investigate a cellular feature that works similarly to tumor mutational burden to attract the immune system to cancers. It focuses on a type of RNA editing cellular machinery that influences protein production, called the spliceosome. Santa-Maria says rare mutations to the spliceosome cause variations in protein production that should make the cancer look unusual enough to the immune system to draw a response. They are studying whether treating these patients with immunotherapy will cause their immune systems to attack their cancers. The PRISMM study has a unique virtual design and will soon open to advanced breast cancer patients being treated by an oncologist anywhere in the mainland U.S. Patients who had genetic studies of their tumors (sequencing) that revealed a spliceosome mutation may participate. All treatment will take place with their local oncologists, with Johns Hopkins researchers providing treatment recommendations through a specialized molecular tumor board and remote follow-up. Information about the study will go out to the public via social media campaigns and postings on disease-specific discussion groups and websites. “This represents a first but critical step toward making personalized, precision medicine available to the larger public and also enabling rare mutations to be studied at scale,” says Santa-Maria. “It also takes a key first step toward incorporating outcomes in the community setting, where most cancer patients receive their care, into the body of academic literature and knowledge.” The INDALA (Immunopharmacodynamic Study of Neoadjuvant Durvalumab Alone or in Combination with AZD4635 in Triple Negative Breast Cancer) study is a collaboration among heavy hitters in cancer research and immunotherapy. Nobel Prize winner Gregg Semenza, M.D., Ph.D.; leading cancer immunology expert and Kimmel Cancer Center Deputy Director Elizabeth Jaffee, M.D.; and Jonathan Powell, M.D., Ph.D., Associate Director of the Bloomberg~Kimmel Institute for Cancer Immunotherapy, are exploring how targeting adenosine receptors could enhance responses to immunotherapy.

Adenosine is a metabolic byproduct that can “switch off” cancer-attacking immune T cells. Santa-Maria will be conducting a clinical trial in patients with early-stage (stage 1 to 3) triple negative breast cancer to evaluate how to overcome this potential resistance mechanism to immunotherapy.

The study is expected to begin in early 2021.

“This represents a first but critical step toward making personalized, precision medicine available to the larger public and also enabling rare mutations to be studied at scale,” says Santa-Maria. 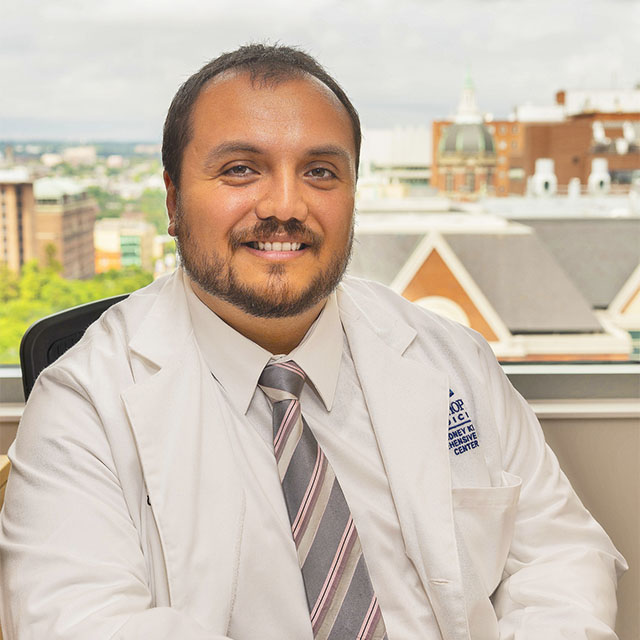 His main focus is immunotherapies, treatments that harness the power of the immune system to fight cancers.
back to top button