Update to readers: Since this article was published, leadership changes at the Johns Hopkins Center for Transgender Health include the appointment of plastic and reconstructive surgeon Fan Liang as medical director. Paula Neira now serves as program director of LGBTQ+ Equity and Education in the Johns Hopkins Medicine Office of Diversity, Inclusion and Health Equity.

In a little more than a year, the Johns Hopkins Center for Transgender Health has provided gender affirming surgeries that changed the lives of about 150 people. Here are the stories of best friends Dylan Ballerstadt and Kez Hall, and, below, Dariel Peay.

Dylan Ballerstadt and Kez Hall, female on their birth certificates, grew up with bodies that didn’t match their gender identities. It was maddening, they say, to wake up every day and not feel or see the bodies they knew they should have.

Ballerstadt's first memory is of standing up to urinate because that’s how boys do it. “I was 3 or 4,” he says. “I told my grandmother and she scolded me, but I knew it felt right to me.” As he got older and began dating girls, he referred to himself as gay, even though he knew the term wasn’t right.

“To me a lesbian is a woman who likes women, and that wasn’t me,” says Ballerstadt, 26, who was raised by his grandparents in Baltimore City and in Harford and Baltimore counties. “I liked women but I wasn’t a woman. But I didn’t tell anyone because I didn’t know what to say. I didn’t know anybody who shared the same feelings.”

Hall, now 25, hated the dresses and matching hair ribbons his mother made him wear. He didn’t want to sit with the girls when his teacher divided his fifth-grade class by gender to talk about puberty.

“I always felt different,” says Hall, who was born in Toronto and moved with his parents to Harford County when he was 6. “I didn’t have the words. I just knew I didn’t want boobs. I wanted a beard, I wanted a mustache, I wanted short hair and I wanted a penis.”

The two young men, now best friends, met at Towson University. Hall enrolled in 2012, and Ballerstadt arrived the following year. Separately, they discovered the Rainbow Lounge, the school’s designated resource and socializing space for LGBTQ+ students. That’s where they met, and where they got to know other LGBTQ+ folks.

“For the first time in my life, the things I was feeling made sense, and it made me feel normal,” says Ballerstadt. They began taking testosterone, which gives them facial hair, deeper voices and more muscular physiques.

This year, they both received double incision chest masculinization surgery from Devin O’Brien Coon of the Johns Hopkins Center for Transgender Health.

“It was great,” says Hall. “They asked me what kind of sports I liked, and I said football and wrestling. I went to sleep, and when I woke up, they were gone. I was a 42DD before.”

The procedure carried an additional layer of complication for Ballerstadt because he has cystic fibrosis, a genetic disease that causes a mucus buildup in his lungs. During his recovery, he had to pause his normal regimen of using a mechanical vest to shake the mucus free until his sutures sufficiently healed.

Next for Ballerstadt and Hall are hysterectomies, and they are considering phalloplasty, a complex procedure that constructs a penis using vaginal tissue and flesh from the thigh or forearm.

The two, who live together in Towson along with Ballerstadt's partner, laugh and high-five as they tell their stories in a Fell’s Point coffee shop.

“I used to cry a lot because I just didn’t like the way I looked,” says Ballerstadt. “I would look at myself and say, ‘Why is my body like this?’ Now, I can’t even imagine looking how I once did.” 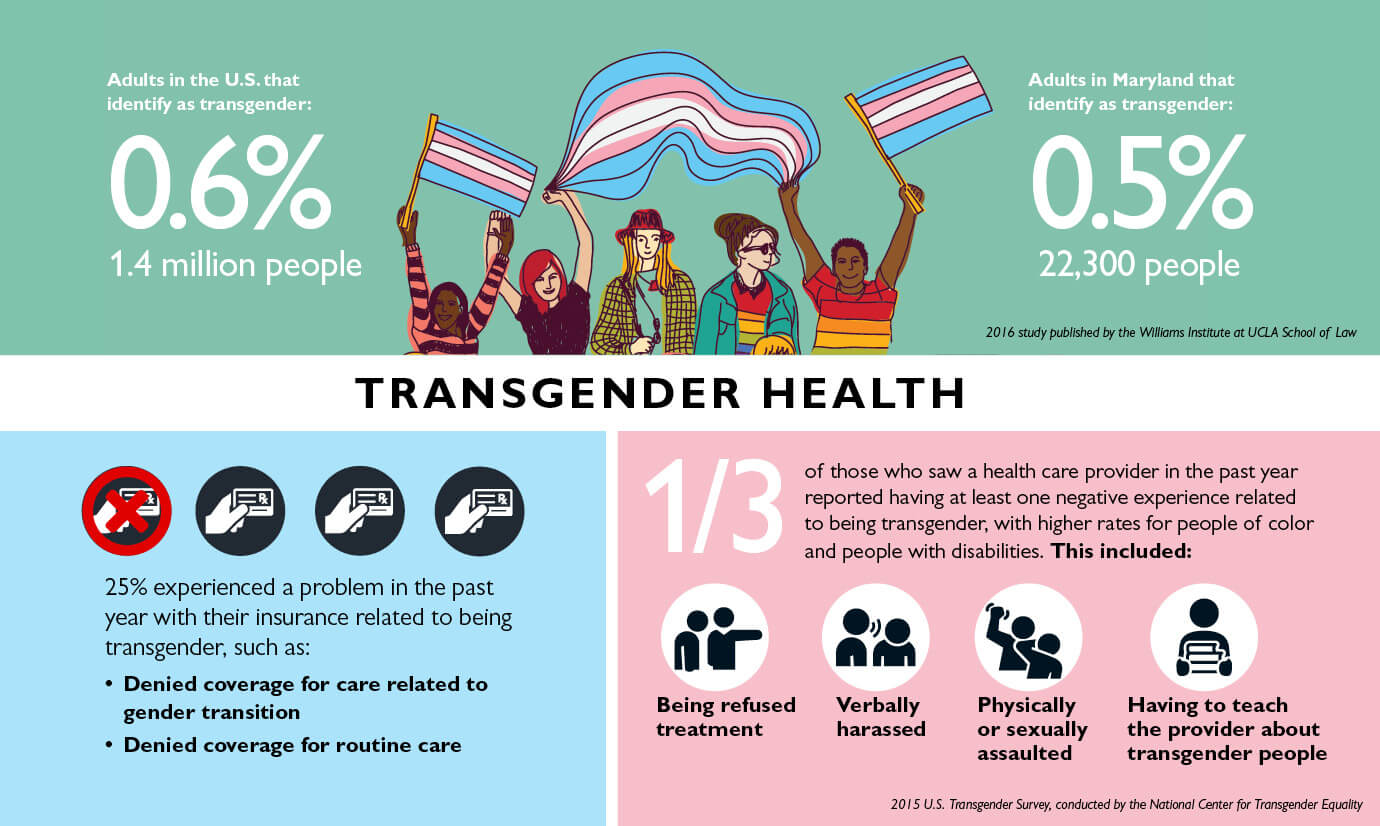 Dariel Peay: ‘Never Give Up Your Power’

Dariel Peay’s prom marked the first time she went to a high school event dressed as a woman. She wore a white pantsuit and matching high-heel pumps, and she felt terrific. “That was my way of being me,” she says. “You could hear the gasps.”

In October 2017, Peay, assigned as male at birth, further aligned her outward appearance with her gender identity when she underwent breast augmentation surgery performed by O’Brien Coon of the Johns Hopkins Center for Transgender Health. Peay is also planning facial feminization procedures with Coon.

“I only wanted Dr. Coon,” says Peay, 34. “He listens to your needs, listens to your story and wants to help you be who you are. He asks, ‘How can I make you whole?’ That question means a lot to me.”

Peay, a senior patient access supervisor in the Johns Hopkins Department of Dermatology, sits behind her desk, chic in a navy dress. She always felt respected at Johns Hopkins, she says. When she applied for the access services job in 2007, she interviewed as a woman.

“It felt right,” she says of using female pronouns for the first time. “I didn’t change my name until five or six years later, so everyone here called me Miss Peay.”

The feeling of belonging intensified with the opening of the transgender health center. “The center means a lot to me,” she says. “There are resources now that I didn’t have. A lot of younger folks have a different story than I do. Their struggle was not as difficult. It’s still not like they have an easy road, but it’s less of a hardship for them now, especially in this climate.”

When she was growing up, she says, there was “not a lot of representation of people like me. I was left with ‘gay’ or ‘lesbian’ as the words I could use to define myself. Most of the gay folks that I knew were kind of feminine so I just kind of assumed that was the answer, even though I knew how I envisioned myself on the inside, which was as a female.”

Raised by relatives in Baltimore and South Carolina, Peay never tried to hide her gender identity. “That was just who I was,” she says. “In my head, I was normal. I didn’t match, but I just knew people had to get over it.”

Peay is now a co-leader of on-campus transgender awareness workshops. She is also a facilitator for training through Safe Zone, a free education program for the Johns Hopkins LGBTQ community and allies.

“What surprises me is that people want to learn about how to become an ally for my community. I always assumed that people have their stereotypes and their beliefs and they stick to them. It turns out they want to know and they want to educate other people. One lady we met had a daughter who was transitioning to male. She wanted to be part of her child’s journey. I was like, ‘You are mom of the year.’

“I tell people, the moment you let others define who you are, you’ve given up your power. Never give up your power. I defined myself as a trans person even when I didn’t know what trans was.

“The second message is, never be afraid. There’s always fear, but if you refuse to give in to it, you’ll be surprised what you can do.”

Cisgender: A term for people whose gender identity generally matches the gender assigned for their physical sex. In other words, someone who does not identify as transgender. The word is derived from the Latin root “cis” meaning “on this side.”